Another beach was on our schedule for the next day, this time the hidden “Bunes” beach, which can only be reached via boat (to Vindstad) and hike. We started at 9 a.m. with a 20-minute bus ride from Å to the village of Reine. Then we had to catch – and first to find – the little boat heading through the Reine-Fjord to Vindstad. Reine is beautiful, but it isn’t big. At first, we went to a wrong direction to the boat. Other confused tourists did too, but finally, we found the little pier which is not far from the church. At least you know it has to be at the water, which reduced the thinkable possibilities where it could be located. The boat ride through the Reine-Fjord was an experience in itself. The little boat was quite fast on its bumpy ride, where you sit outside and try not to be thrown overboard. And then you have the scenic, huge mountains with the low clouds all around. After a short stop in Kjerkfjorden, we continued with the boat to Vindstad. 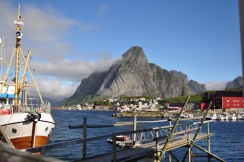 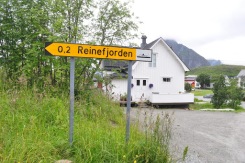 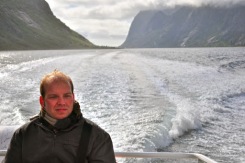 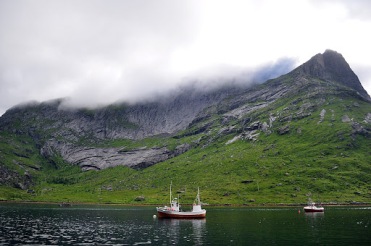 Vindstad isn’t really a real village – it was more like a couple of cottages far away from each other in the middle of this beautiful landscape. It is in the middle of nowhere, practically reachable only by boat through the Reine Fjord. From the jetty, you can walk through the “village’s only path” going over the hill and to the other side of the Fjord, the Bunes beach. It was easy to find because there was even a sign going up the hill and you could see the peak and already see the beach down below. From above, the view was magnificent. On one side, the Reine-Fjord, on the other, the Bunes Beach. 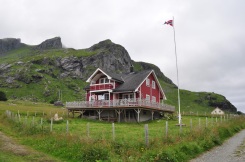 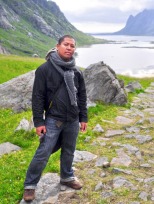 We walked down to the vast and lonely beach until we reached the ocean. After a picnic in the dunes and some walking around we slowly went back. Some people even camped there, but we wanted to reach the only boat that day returning to Reine. Back in Vindstad, there was a lovely surprise – some Norwegians had opened an improvised cafe for the tourists that came returning from their walks and were waiting for the boat. They were selling waffles and hot coffee, which was just what we needed. It was like a very temporary cafe, open only shortly before the boat leaves to Reine in the afternoon. 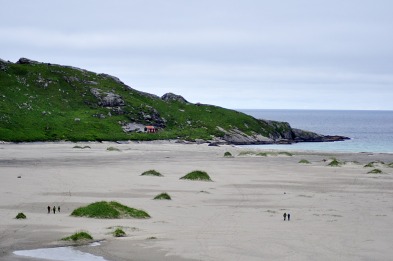 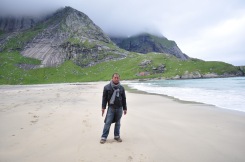 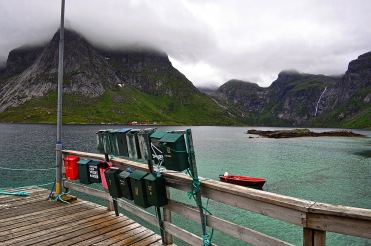 Back in Reine we took a short look at the village before our bus left back to Å. Then we finally had some time to take a closer look at Å. It is a very idyllic little village with the red Rorbu, the mountains and the sea. Another reason we chose it as the location was its good bus connections, it lies at the southernmost end of the Lofoten and the buses start from there in the morning and then head northwards and come back in the afternoon and evening – perfect for trips to other destinations in the area like Reine and Ramberg. Å also has a “Fishing Village Museum” and a Stockfish Museum. (Stockfish or codfish)

We went grocery shopping at a very little supermarket for our dinner before we went back to our own Rorbu. Then we went to take a look at the “Moskenstraumen” at the very end of the village, after passing the big parking lot, where the bus station is located, and the camping ground. It was yet another quite scenic area and some people where camping there too – although it was bit muddy there and it had big mosquitoes. I even returned there later with my tripod for some shots after having dinner at our lovely Rorbu. 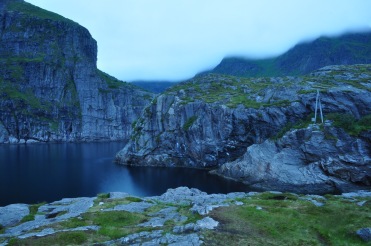