After a short break at the Inn, we then went out to explore the city. Puerto Princesa as I remembered hasn’t really changed that much. There are the familiar places I go to in high school and college. Even my friend said that unlike in Cebu or Manila he felt safer everywhere in Puerto Princesa in spite of the chaotic traffic of mostly tricycles and multicabs. I’ve learned later on that the big buses and trucks were already banned inside the downtown area. They have a terminal at the new market just outside the city center. There are no taxis in the city, but plenty of tricycles that are more or less dented but also cheaper. Only the traffic is chaotic, albeit on a smaller scale.

We first went to the port area to see the cathedral which is one prominent edifice in the city esp. when you arrived by boat or ship. The Plaza Cuartel lies next to it. It is the unfortunate place of a massacre of more or less 150 American soldiers by the Japanese soldiers during WWII at the underground bunkers. A bronze marker was placed on the site now.

Next, we went to the “Baywalk” where formerly a slum area and now a fantastic promenade with a view of the sea and the mountains. There are numerous food and beverage stalls, we splurged a very simple but tasty mango shake.  Afterwards, we went to the “shopping centre” at NCCC to buy some provisions. 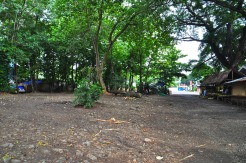 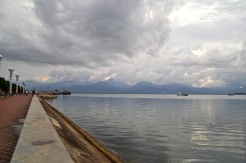 Puerto Princesa takes pride to be the cleanest and greenest city in the country, and it’s rightly so. The city centre does not have so many attractions, but it has many just outside in the nearby Barangays. The crocodile farm is only ca. 20 minutes away and the beautiful butterfly garden is also about along the way.  We opted out to go to the crocodile farm as what a friend of mine told me that it is not kept in excellent condition, and the safety is somewhat a bit questionable. Anyhow, it was not a big deal for us since we still have a lot to go to and see. One would already need a day to do the island hopping along Honda Bay. Most of the tourists go on a day trip to the underground river, but for a real nature lover, I could say that three days would probably be the minimum.

Puerto Princesa is the capital of the province, hence the primary jump-off point for travelers to the islands. But of course one can opt to go there as a last stop-over before going back to Manila.

In the evening we met my good friend Daisy who picked us up and brought to a nice restaurant “Ke Nikko” in Barangay San Pedro, where she also personally knows the owner. We got introduced and eventually “Nikko” drove us back also to our place.