We bought the tickets for our bus from Plitvice to Trogir online at Croatia Bus before leaving Berlin, but my friend was a bit worried, because he had seen some internet portals, which seem to have timetables for all long-distance bus connections in Croatia, and ours wasn’t included. So we asked at the hotel reception. They were accommodating and actually had a printed timetable for all buses from the different companies leaving Plitvice – which included ours. So we learned that the central Internet-portals don’t necessarily include all buses to their listing. After another lovely breakfast, we left the hotel to the bus station. We were a bit early – which was recommended because with the long distance busses it is always possible that they are a bit early or a bit late. After it was clarified that our bus would drive via Zadar to Trogir, we even knew on which side of the street we had to stand. After a short stop at a restaurant near Plitvice, where a live bear, as well as stuffed brown bears, are shown and another shortstop in Zadar, we finally reached our next destination, Trogir, after five hours on the road. 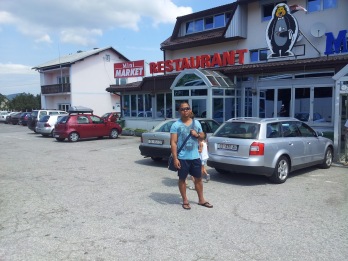 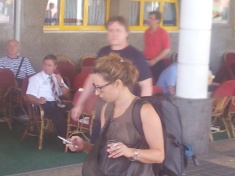 We had chosen Trogir as a one night stop because our next destination was Dubrovnik and Trogir is located between Plitvice and Dubrovnik. Of course, another primary reason was that it has a small, beautiful old town on a small island, which is also a World Heritage Site. Before we could enjoy that, the first thing we had to do at the bit shabby Trogir bus station, was to buy the bus ticket for the next day to Dubrovnik. Croatia Bus with its online booking, which we had used before, unfortunately, had only a very late option from Trogir to Dubrovnik, so we had to take another company,  Autotrans, where we couldn’t buy the ticket online and not even in their office in Pula. But getting the ticket at the bus station in Trogir was no problem.

The bus station is located right next to the bridge leading to the old town. We had booked a small and relatively cheap hostel, “Carol Rooms”  on that island in the middle of the old town via the reliable booking.com and it was just a short walk from the bus station to the hostel. There were a lot of booths along the water on the island, selling souvenirs and foods and it was a lively atmosphere. The old town of Trogir on the little island is full of small alleys. First, we walked past ours, before finding the hostel. It was an old building, and we were already expected and welcomed nicely. Our room turned to be quite modern with Flat screen TV (and about 200 channels), modern silent air-con, free Wi-Fi, small refrigerator, a nice view and our room shined with bright colours. They also have an inner courtyard as common space used esp. by the smokers. We had hotels that asked for double the price for what Carol Rooms offered. We just loved this “hostel” and the best value for the money (*it turned out to be our best accommodation during the trip). 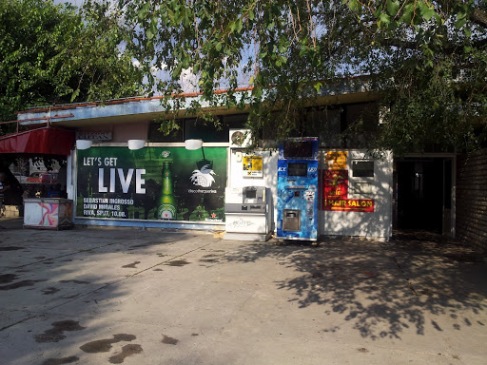 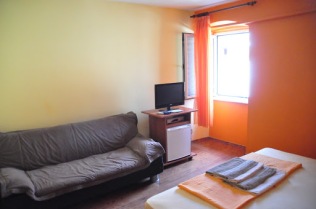 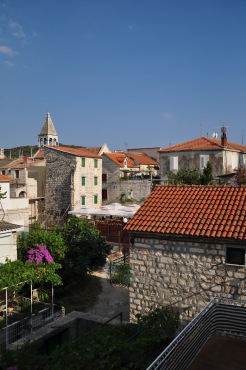 After our long bus trip, it was already very late in the afternoon when we arrived, but Trogir old town is small, and it was still enough time to see something of it. We started our city walk with the Kamerlengo Fortress  (“Tvrdava Kamerlengo“), where we also had a beautiful view of the town and the sea. We went along the busy promenade, where some impressive yachts have anchored, before entering the small alleys of the old town. Amid a lively atmosphere, we came to the Town Loggia with the Cathedral of St. Lawrence and St. Sebastian’s Church with the Tower of the Town Clock – and also some inspired singing by some Croatian singers, selling their CDs. 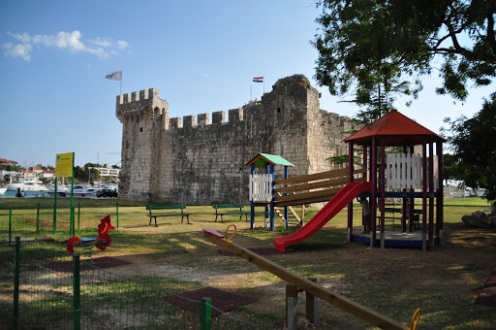 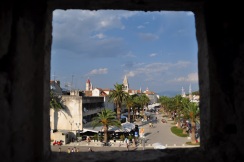 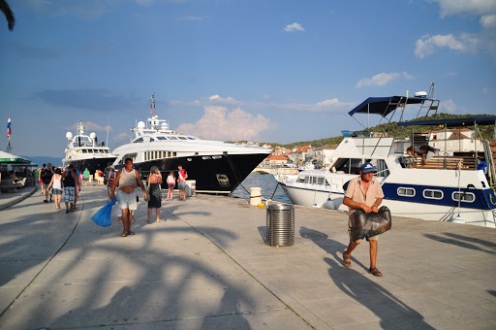 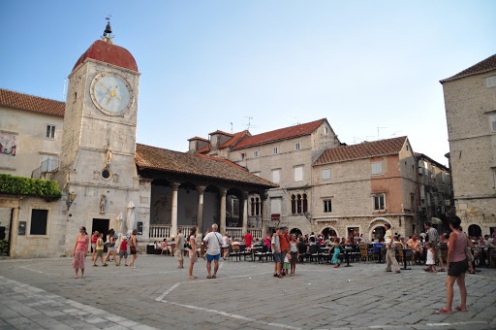 Soon we arrived at the town walls and the gate on the other side of the island. We got a delicious fruit juice from a booth there, before going to dinner back to the other side of the island through the small alleys. The sun was already setting when we chose a restaurant at the marina and the still lively promenade. It was much too expensive for us, but we swore to ourselves to save on the next days and to enjoy a great meal with langustini and cevapi with djuvec rice. When we left to get back to the hostel, the promenade was still busy with singing and performances. Trogir proved to be a delightful stop. With more time, we would have probably stayed there for another day to make a day tour to the National Park Krka and Šibenik to visit the Cathedral, which is also a World Heritage Site.

After dinner, we went back to the hostel, and my friend decided to stay back and rest while I went out and about with my tripod and camera and enjoyed a bit the sight at night! 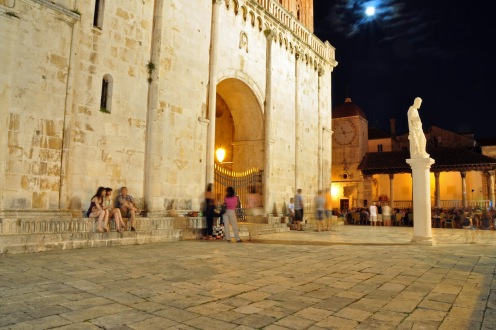 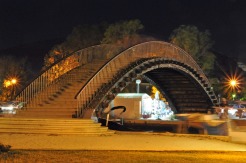