Early in the morning, we left our lovely apartment to go to the nearby ferry pier in Split for a day trip to the Island of Hvar. Split is not only a great stop with many attractions for a visit but also a good place for day trips to many islands around – for example, Brac, Vis and Solta. We opted for the Island of Hvar because we wanted to see the historical sites in Hvar City and Stari Grad. Since we’ve bought the tickets for the ferry the day before, we could board the big car ferry from Split to Stari Grad immediately. It was nice to travel with a massive ferry for a change and to have the possibility to sit outside on deck the whole time. Another good thing about that ferry was that they had many connections a day and with the return-ticket, you could spontaneously decide which one you take – it wasn’t bound for a specific departure that day. After about two hours we reached the ferry pier in Stari Grad. 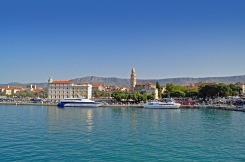 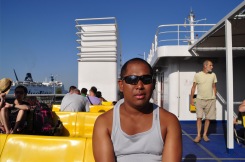 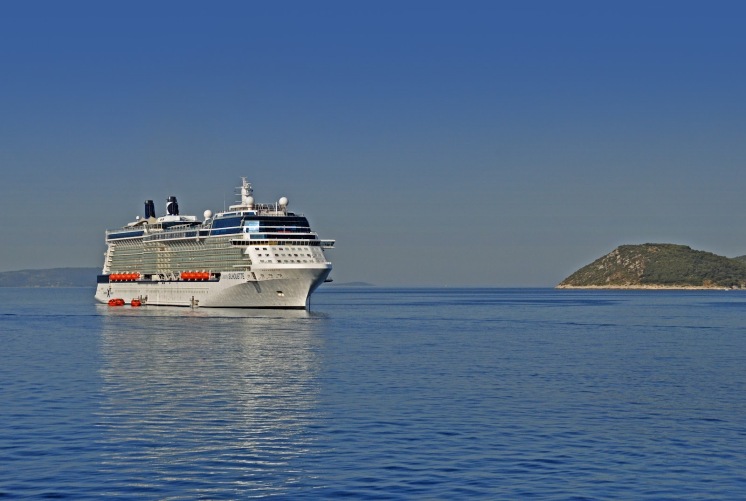 We had read already that there are buses from the ferry pier in Stari Grad – which is located a bit outside of Stari Grad – to Hvar City. So we went to the bus, which was already waiting – it was a small bus, especially considering the number of people coming from the ferry. But that didn´t seem to be a problem for us because we were in the first third of the queue for the bus. Unfortunately, we all had to wait, because some guy blocked the entrance of the bus, arguing for what felt like 10 minutes about his ticket with the bus driver. After some time – everybody was still waiting for the guy – a woman went along the queue and talked to the bus driver. Then she, who seemed to be a teacher from France (Merde, why it didn’t surprise me at all?!), shouted to a large group of young people, who were waiting at the very end of the queue. Then they all started moving past the crowd. Everybody else who had been waiting was like “what the hell”, but there was nothing to be done about it, and it was clear, that no one else would get into the bus anymore.

Weighing our options, we saw another bus, not to Hvar Town but at least to the centre of Stari Grad. And while we were standing in front of it, not sure to get on board, another bus to Hvar Town arrived. Unfortunately, this bus was already two thirds full, and there were still many people left, who wanted a coach to Hvar Town. Unfortunately for us, we were far away from the new bus; the rest of the crowd was closer and was already running towards it. When we were there, it seemed clear, that we wouldn’t get on that bus either. Then we saw the other bus to Stari Grad leaving. I was close to a nervous breakdown, fuming mad after having missed three busses and now there was nothing left. I really needed a coffee and something to eat, so we went to a restaurant nearby the pier to cool down. I have to say, the transport there was severely disorganised – it can’t be too surprising, that many people come from the ferry every day and want to go to Hvar Town. It would have been nice if they just offered two empty buses.

We were shortly thinking about a taxi to Hvar Town, but it was way too expensive (around 40 Euro). Stari Grad (lit. Old Town) on the other hand was only 2 kilometres away from the pier, and so we decided to go there first and then look around for a bus from Stari Grad centre to Hvar City. That was a good decision, the path to the town led through wooded greens along the beautiful coast with the crystal clear blue waters. It was so lovely that we spontaneously opted for a swim and there were many excellent places to lie down next to the water and not too many people around. The next thing I know, I stepped onto a sea urchin. Luckily I had my bathing shoes on, but the stings still had found a way through my rubber shoes. It wasn’t too bad though, and after lying a bit in the sun, we soon continued our walk to Stari Grad. 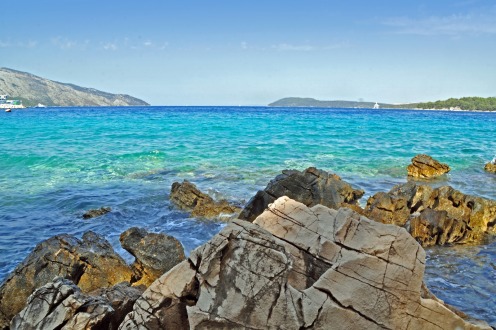 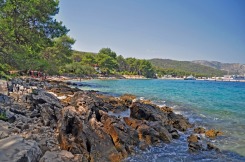 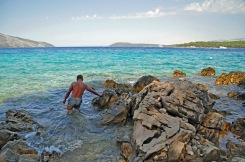 Stari Grad is a little town and much quieter than Hvar Town. Hvar, as we’ve heard before is the party town on the island. When we came closer to the town centre of Stari Grad, it felt relaxed. After passing the marina, we entered the city with a lot of old and beautiful buildings, including the Tvrdalj Castle and the Dominican Monastery (Dominikanski Samostan). Especially impressive were the many small alleys of Stari Grad, which is – as a part of the Stari Grad Plain – a World Heritage Site. 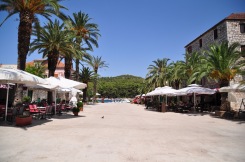 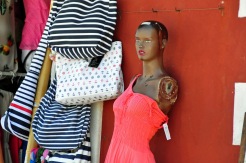 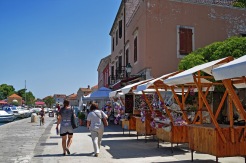 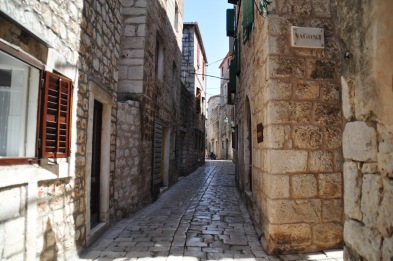 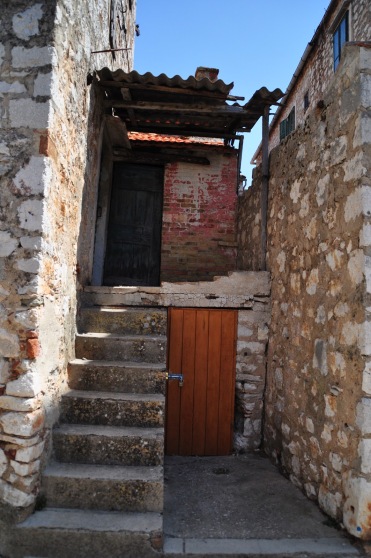 At the helpful tourist information, we got a timetable for buses from Stari Grad to Hvar City, and they also told us where to find the bus station. We had some time left before the next bus would go, so I finally got some watermelon at a nearby fruit market that we passed by. I actually wanted some for days already but never got one, because they are so huge, but this time the lady at the fruit stand cut me some manageable pieces. But she was so convinced that we still got way too much watermelon for our “lunch break”. It was delicious though, and we ate at the nearby park. After a little siesta, we went to the nearby bus station – everything is closed there – and this time had no problem getting the bus to Hvar Town. 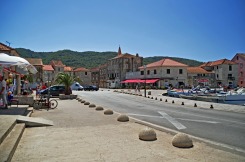 The bus ride to Hvar took about 20 minutes through a mountainous area overlooking the beautiful island and cost about 4 Euro. The bus stop is located at the outskirt of the little city, and we came directly to the huge square (Trg Svetog Stjepana) with the Cathedral (Katedrala Svetog Stjepana) and many renaissance buildings. The plaza extends to the waterfront, with the loggia and the clock tower. We didn’t have too much time left, so we just strolled along the waterfront, past yachts and a lively atmosphere with many young people. 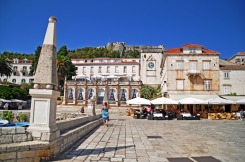 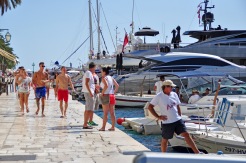 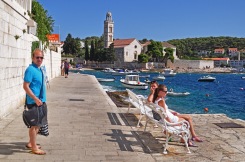 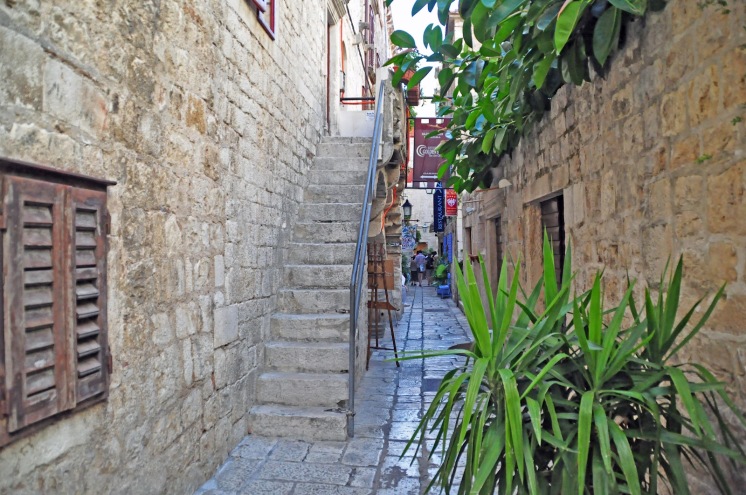 We finally reached the Franciscan Monastery and already had to slowly go back to the bus through charming small alleys. Unfortunately, we had no time left for a walk up to the Fortica Španjola, the fortress. 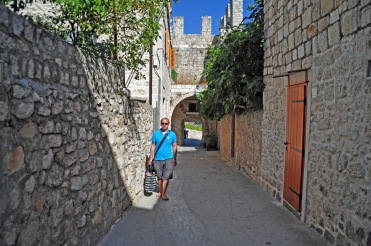 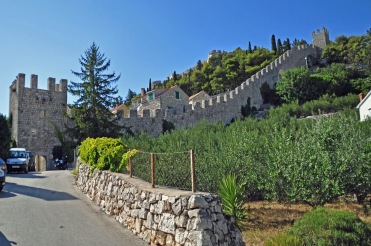 When we arrived at the bus station, it was good to be there early – it got so crowded, that many people had to stand inside the bus the whole way back to the ferry pier in Stari Grad. The bus driver and the conductor were the same people from the bus earlier to Hvar, and whom we had asked about the right bus and where it stops and stuff, they were accommodating.  When we left the bus at the ferry pier in Stari Grad, he even said goodbye with a handshake. The bus was timed perfectly for the huge car ferry back to Split, and so we could just enter and enjoy the scenery on the trip, sitting on the deck. 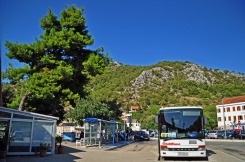 It was our last evening in Croatia, and we couldn’t leave without taking a swim in Split, especially as the Bačvice beach was just a 5-minute-walk from our apartment. So we cooled off in the water before we went back to the beautiful apartment and packed for leaving the next morning. 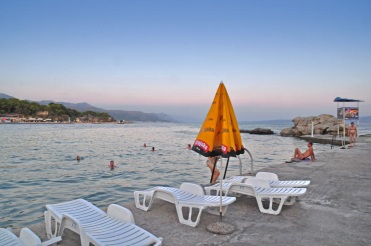