Iceland, the land of ice and fire… and trolls, elves, dragons, Gandalf etc.

Iceland was not our first choice for this year’s summer vacation. We wanted to go to East Asia and eventually to visit my family in the Philippines. But we need to change our travel plans as I have been considering a more extended stay in my home country next year. So then my friend and I decided to just visit a neighbouring country in Europe.

It took us almost half a year to plan for this travel. One primary consideration is, of course, the length of stay and budget. The next thing to do is doing a research and drawing up the itinerary aided by our most reliable source of information, the Lonely Planet. By doing so, you’ll be able to maximise your time. We booked our flight six months in advance.

When you love to see and take photos of scenic landscapes, cliffs, amazing waterfalls, geyser, craters, steaming earth, hot rivers, and mud pots, then you only have to go to Iceland. That was at least good enough reason for me to exchange a couple of weeks of hot summer in Berlin to a couple of weeks of cold weather in Iceland.

We flew into Reykjavík from Berlin TXL with airberlin. The flight took a bit more than three hours to the international airport Keflavík (KEF). Then we had to take the Flybus to the city centre of Reykjavík which is 50 kilometres away from the airport. We had our tickets for the Flybus pre-booked online, but even then when we arrived at past midnight, the ticketing office was still open so you can purchase tickets there upon arrival too. Busses were waiting since they scheduled them with the time of the plane arrivals. It was still daylight when we arrived in Iceland. It is summer after all, but the temperature was just an average of 10°C (during our entire stay) compared to the 20-30°C summer in Berlin. 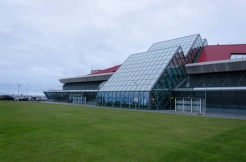 From the bus, we got our first impression of Iceland and its scenic lava landscape. But I immediately dozed off on the bus as we were both tired. After about a 50-minutes drive, the bus driver brought us directly in front of our hotel, the Guesthouse 101.

For the Icelandic condition, it was relatively the cheapest option. It was centrally located, and the reception was open all night. It was nothing special but very functional. Our room has one double-bunked bed and two regular beds. Probably the rooms were intended for groups or families. The room has a sink, but the shower and toilet were shared. 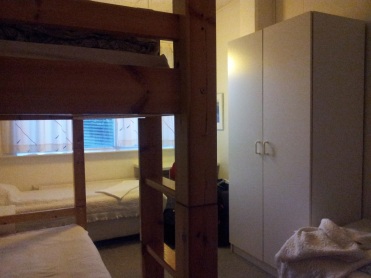 We arrived at 2:00 a.m. at the hotel. I was famished and already packed a meal of Adobo and rice which I cooked in Berlin. I packed it really tight and made sure that there would be no soup or juices that might run out of my container. I ate a bit of it, brushed my teeth and immediately went to bed to get a few hours sleep before taking the bus at 8:00 a.m.

We got up the next morning at 6:30 a.m. and immediately fixed ourselves and collected our belongings to get ready and eventually walked to the bus station. The bus to our first destination leaves at 8:00, and it seems like it was the only bus going to Stykkisholmur in the morning, a town in the western part of Iceland. We even had thought of skipping the hotel and spend the remaining hours waiting at the station. Fortunately, we did not. We would have remained in the cold and won’t be able to catch some real sleep. The few hours sleep made us fit and gave us enough leverage to get through the long day.