We started the day early in the morning and left for a day trip from Fukuoka to the Yoshinogari Historical Park and the porcelain town of Arita. We took a train from Hakata Station to Tosu Station and changed the train there to Yoshinogari Koen Station. We had printed out some train connections before the trip from a useful website, where you can search for all the train connections and timetables. So the journey was without problems. While there are some trains, that have no electronic display or station announcements in English, the stations usually have signs in Japanese and English, so that you can see where you are. With the help of the website, you can also look how many stations one trip is. 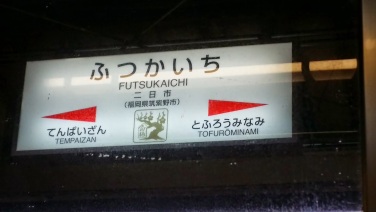 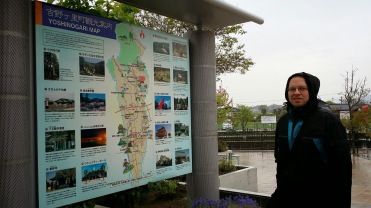 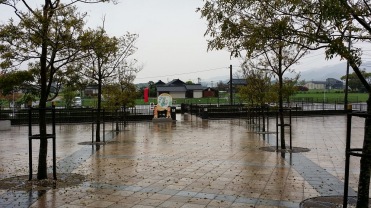 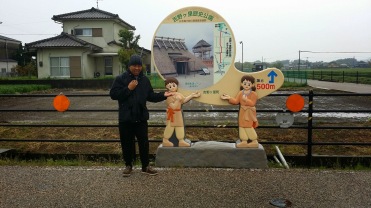 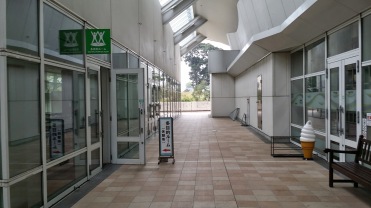 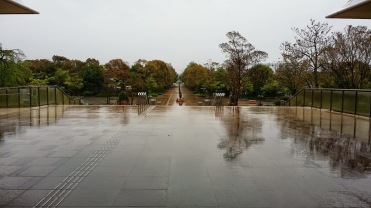 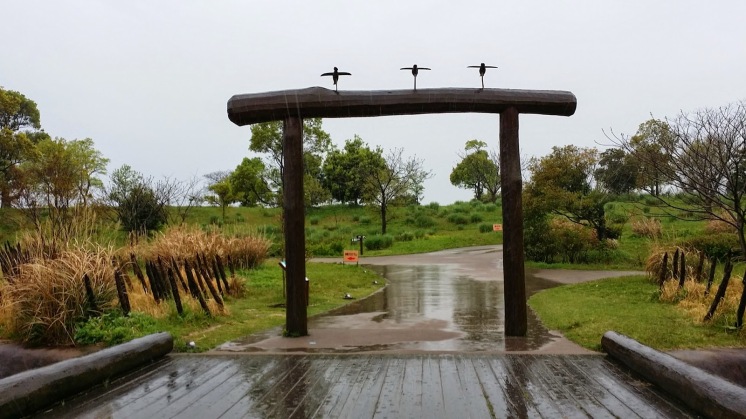 After a short wait (we were there a bit before the opening) we could enter and walk around a lot through the vast complex, that we had mostly for ourselves because of the still heavy rain and early time. We had thought about changing our plans due to the weather because an open-air museum didn’t seem to be the best idea during heavy rain, but it was either that day to visit the park or never. We would be travelling to another town the next day, so we were glad, we didn’t skip it because it is a fascinating complex with a lot of reconstructions. The area was one of Japan’s most extensive moat-encircled villages dating from the Yayoi period. We entered in some of the reconstructed buildings and also visited the small museum. 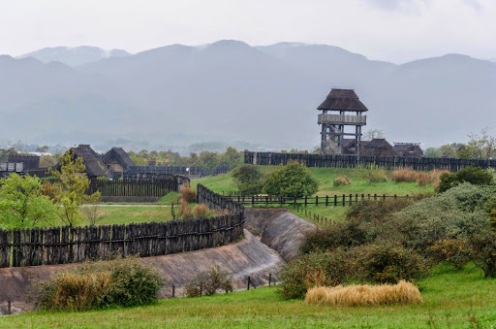 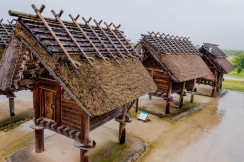 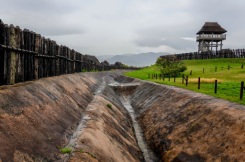 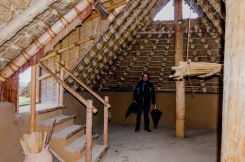 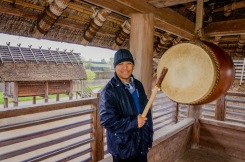 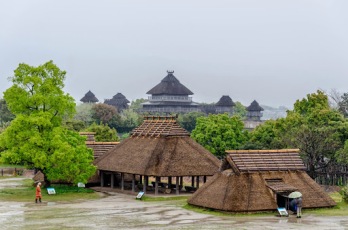 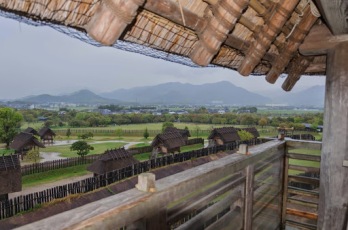 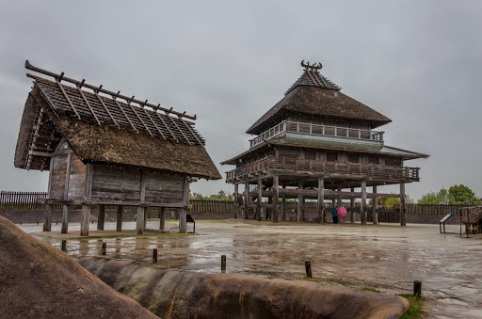 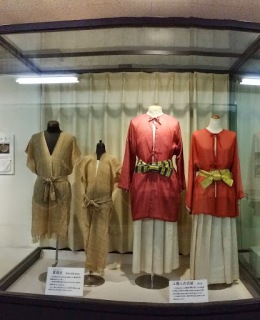 When we were finished, we went to the restaurant at the park entrance where I finally got something to eat, and my friend finally got green cookies at the tourist shop. We also bought umbrellas there, as it was still raining. 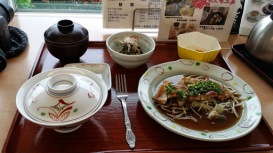 We went back to the Yoshinogari Koen Train Station and continued by train to  Hizenyamaguchi Train Station where we changed trains to Arita Station. It took a bit more than one hour to Arita. Arita is a famous Japanese pottery town in the Saga prefecture. We also thought about going to Karatsu, which too looks excellent based on the internet, but ultimately decided in favour of Arita, which doesn’t have a castle like in Karatsu but a huge porcelain museum. From the Arita Train Station, it was just a short walk south along the main road, until we came to a pedestrian crossing that led upon where the museum was located atop the hill. It took 15 minutes walk from the station to the Prefectural Museum of Kyushu Ceramic Arts. The museum is full of beautifully decorated ceramics, has some information of the pottery tradition of the area and a huge ceramic clock as a highlight, that has some performance by little figurines inside when it rings every hour. 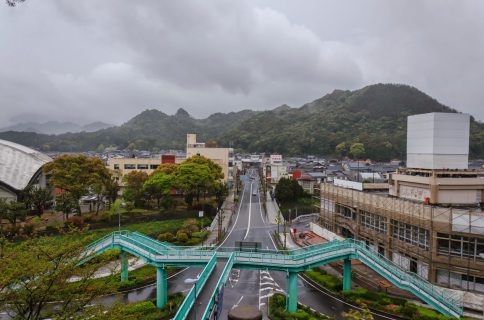 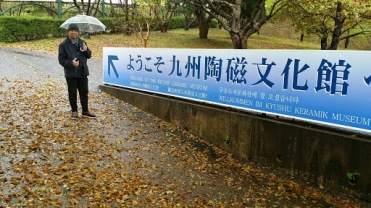 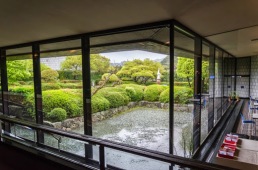 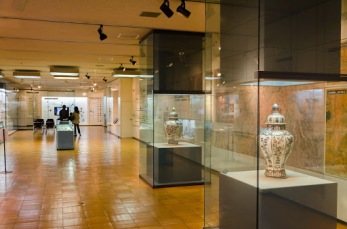 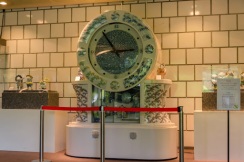 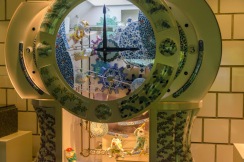 Arita has some more attractions, that are located at the next train station, the Kamiarita station. So we took a train to one station and then walked through the sleepy small town and went to see the Tonbai Wall Alleys. 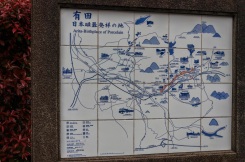 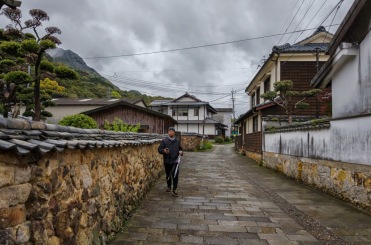 Then we continued to the Tozan Shrine, which has a beautiful Torii Gate out of porcelain and is located across the train tracks on a hill. After that, we went back to the Kamiarita Train Station. We would have loved also go to the Zwinger Palace, a full reconstruction copy of the Zwinger Palace of Dresden in Germany, but you could only get there by car or taxi, and there was no taxi around. So we took a train to Takeoonsen Train Station, to change there to a train back to Hakata Station in Fukuoka. We decided to get our dinner from the grocery store at the station and bought some soda for our trip. Then it was already evening, and we had to pack because we would leave for our next destination in the morning of the next day – Yufuin. 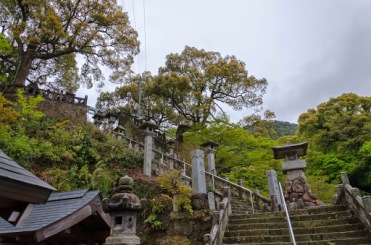 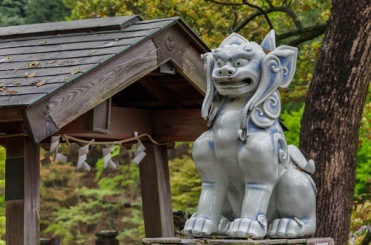 Basically, we lacked a spare day in Fukuoka, because we had no time to take a look at the city. Fukuoka may not have the most significant attractions and is basically a huge, modern, clean and busy town. It still has some sights, we initially wanted to see, like the Canal City shopping and entertainment complex and the bay area with the Momochi Seaside Park and the Fukuoka Tower. But we will catch up on that if we return to the area!