After a nice breakfast at the Actum Hotel in Kranj, we started our first sightseeing day in Slovenia. On our first real day, we actually wanted to see two Slovenian cities, Kranj and Škofja Loka, both with interesting Old Towns. We decided to start in Kranj and first stopped by the Tourist Information, which was just a few steps opposite our hotel. There we asked about a tour through the tunnels beneath the Old Town of Kranj, built during World War II. They told us, that we could join the next tour at 10 a.m. and so we had an hour to walk a bit through the old town first. We started with a little detour to the beautiful river Kokra, where steps lead downwards to some paths. 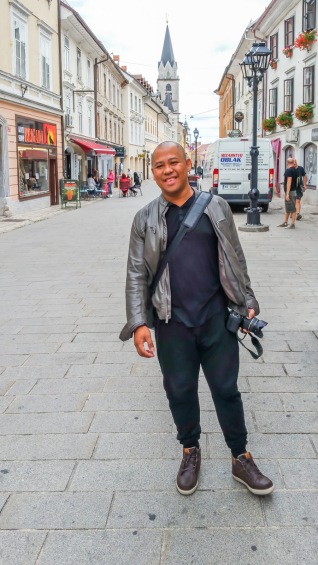 After this short walk we went back to the Old Town and past the Preseren Monument, the Prešeren Memorial Museum and the Ossuary to the Pungert Tower and Church at the southern end of the Old Town, where we also found a scary platform with a view. On the way back to the Tourist Information we walked to the beautiful Plečnik’s arcades and fountain. The Old Town is rather small but pleasant. 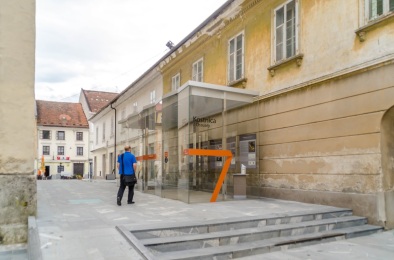 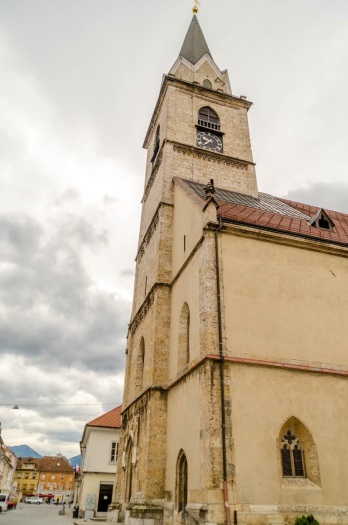 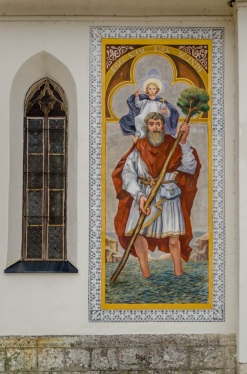 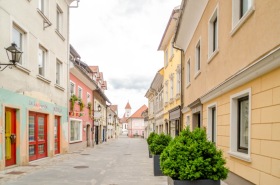 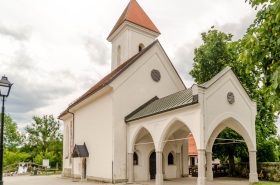 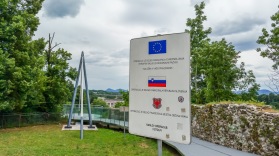 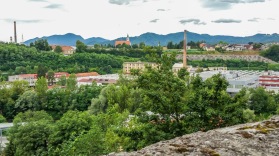 Back at the Tourist Information, there were already some older Slovenian, two nice Australian tourists (the husband from Slovenian Heritage, as he told us) and the guide, who told us that it will be a bilingual tour. We walked together to the entrance of the tunnels and then it took about 90 minutes until we exited at another spot. It was very interesting to see the tunnel system under the city, where the people hid from the bombs in World War II. There was a lot of information inside provided by our guide and displays, some exhibits and they even have a simulation at the end of the tour, where you get a slight feeling through vibrations and sound effects, how being in a shelter feels like, when under attack. After we exited the tunnel, the tour shortly continued to the scary platform, where we had been before, and we joined the group for a second look and talked a bit with our nice guide – she actually even published a guide for the region. 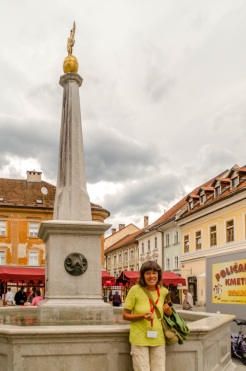 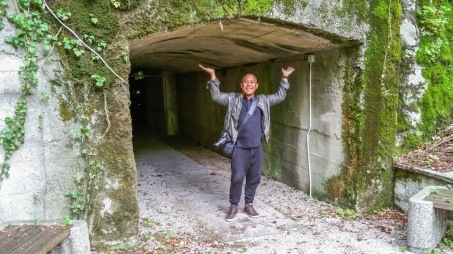 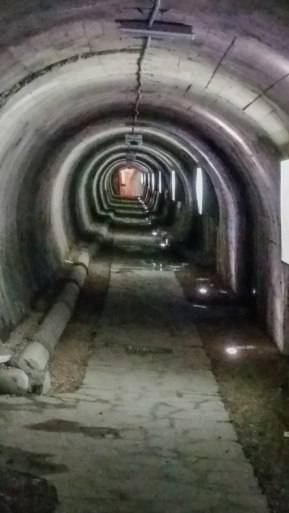 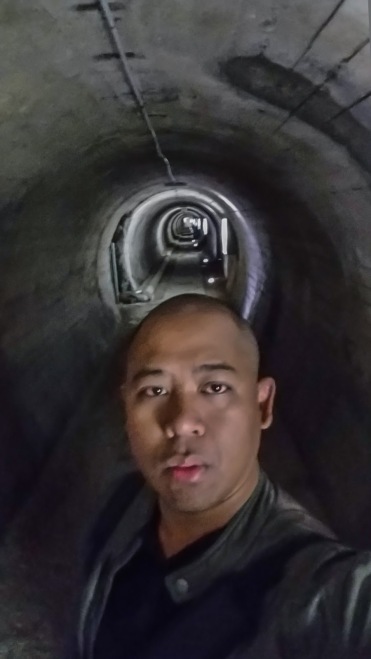 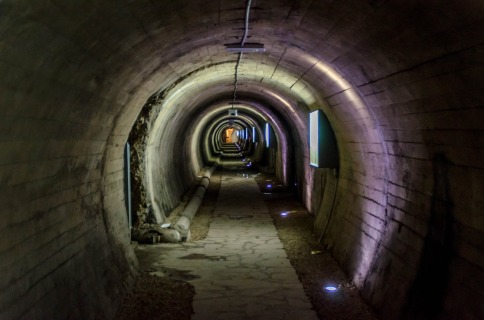 Satisfied from our first look into Kranj we were excited about our next destination, Škofja Loka. Škofja Loka is a small town nearby Kranj and is said to be the most beautifully preserved medieval city in Slovenia. We saw some great pictures online and therefore had included it in our travel plans. After some quick grocery shopping in Kranj, we walked to the nearby bus station (Kranj AP) in the street Stošičeva ulica 2. We had looked up the timetable for the buses to Škofja Loka before, as they are published online. The route is served by bus company Alpetour. The bus station itself was a bit strange, as the busses don´t stop all in front of the station but at different “tracks,” that are marked on the main street. The – track 1 – was way back maybe around two blocks away on the main road down the street Bleiweisova cesta. However, the bus was modern, cheap, punctual and pretty empty. It took just 20 minutes to Škofja Loka. 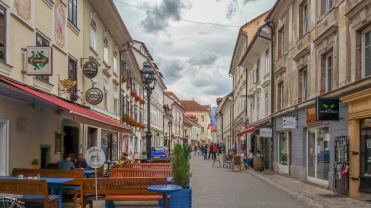 All the public buses in Slovenia we used in our vacation were modern, all on time and relatively cheap. They are great and when it was possible, we actually replaced planned train rides later in the journey by bus rides, given that the buses often are even quicker. The buses only have one deficiency – they have no announcement of the stations (neither electronic nor loudspeaker). You basically have to know from looking outside the window where you are and when to exit. Unfortunately not every bus stop has a name written on it, that you can spot from inside the bus. However, when confusion and uncertainty among tourists inside the bus spreads, the bus driver might shout out the name of the bus stop, as we later in our journey learned. For our trip to Škofja Loka, however, the lack of announcements was no problem, as it was the next bigger bus station coming from Kranj, and also the final destination.

Like Kranj, Škofja Loka is easily walkable. From the main bus station at the Sora River it is just a few steps southwards to the Old Town and a bridge from the bus station leads directly into it. We didn´t choose the train, as Škofja Loka´s train station is about 3 kilometers away from the Old Town. We didn´t go over the bridge at the bus station, but instead made a slight excursion to the west past the Capuchin Monastery and then to the south to walk over the especially photogenic Capuchin Bridge, built in the middle of the 14th century. 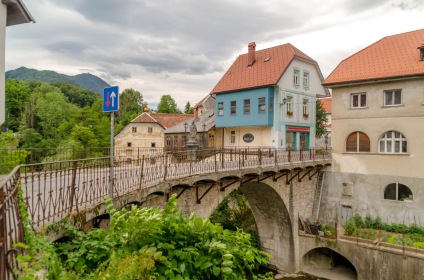 The bridge leads us to a path into the Old Town with a church and then into the main street, Mestni trg, with beautiful old houses and a Plague Pillar, erected in 1751. 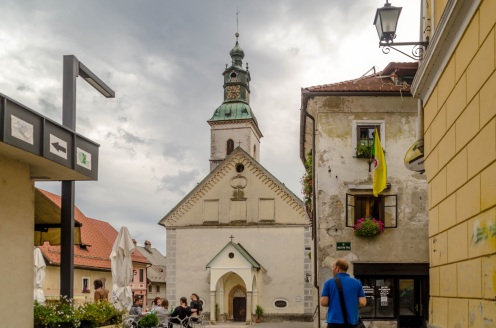 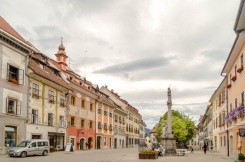 At the end of the pedestrian zone in the south, a path lead us up to the Castle of Škofja Loka. We had to take a break on a bench, as I was feeling a bit under the weather. 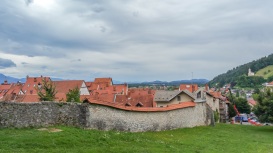 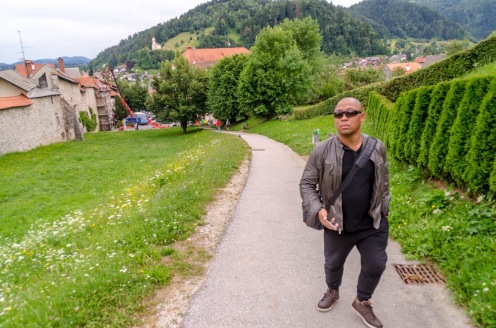 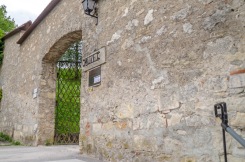 The castle, overlooking the city, is not only a sight itself, but houses another attraction, the Škofja Loka Museum, which we, of course, had to visit. It is relatively huge and offers archaeological, art-historical and ethnological collections and a photo of scary nuns. There was also a modern art exhibition, that I especially liked. 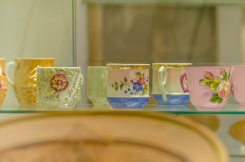 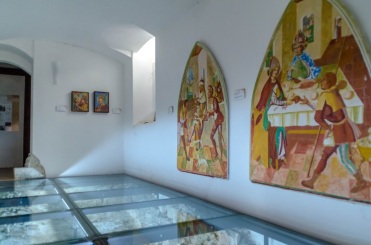 We had quite some time left, until the next bus back to Kranj would depart, so we walked back down and through the Old Town and found a restaurant directly at the beautiful river, where I got my risotto. Growing up in the Philippines, I´m used to eat rice daily and in Slovenia Risotto was the next best option to get some. While we thought we had some spare time, it went by so fast, as we waited for ages for the food while holding onto the stuff on the table as the wind blew strongly. Actually, the wind became so strong, it knocked down the glasses at the neighboring table. After we finally had our delicious late afternoon lunch, we still got the bus and were soon back in Kranj.

When we walked from the Kranj Bus Station to the Old Town we stopped at the Creina Hotel to purchase a Visitor SIM Card, which is available at different tourist spots in Slovenia. We passed by the Grammar School and interestingly, there‘s a huge sequoia tree (Sequoiadendron giganteum) next to the building. I’ve later learned that this is a protected natural monument.

Back in the Old Town, we entered the Church of St. Cantius, Cantianus, Cantianilla and Proteus. We also took a look at Khiselstein Castle (Grad Khiselstein). However we only could have entered it, if we had paid for the craft beer festival, that was taking place at the castle and we needed some rest at the hotel and only later went out again for a late McDonald´s dinner (again). The next day we already would continue on our Slovenian trip to the next and especially exciting location – the wonderful Lake Bled. 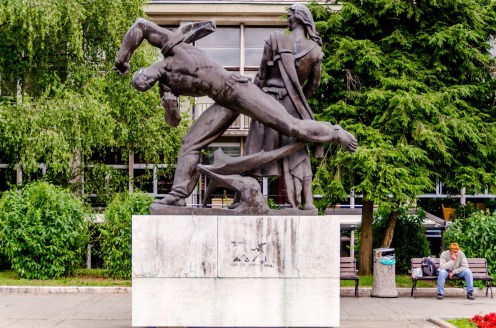 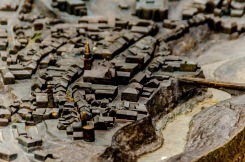 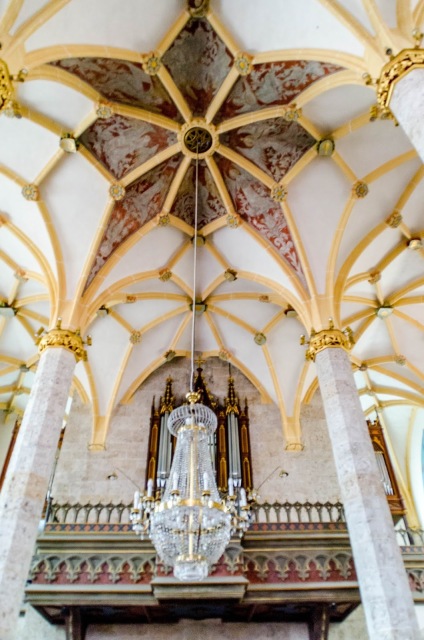 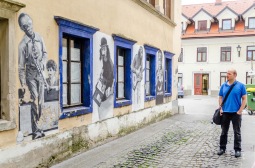