We weren’t really sure, what to do on our second day in Andong. There are so many options. We thought about exploring Andong itself. We visited the Hahoe Folk Village the day before but hadn’t seen much of Andong so far. But we also thought about going to the Bongjeongsa Temple first, which is about a thirty-minute-bus ride away. In the end, we stuck to our original plan of visiting the nearby town of Danyang, which offers plenty of diverse attractions. After all, when we were in Seoul and bought our train pass, we already had to choose the days of validity for the train pass and today was one.

So, we walked from the Goodstay Andong Park Hotel to the nearby train station and got tickets to Danyang. The train just took about an hour to get there. In Danyang, I found a delicious Mango drink from the Philippines, and we soon took a cab to the first sight (and our main reason to go to Danyang) – the Gosu Cave. We had printed out the Korean spelling for Gosu Cave, which we showed the taxi driver and it didn’t take long to get there (it cost less than 6 Euro). 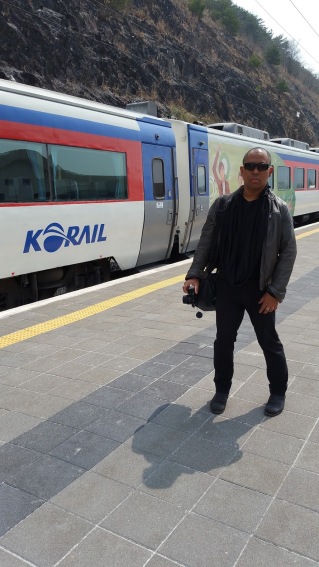 The Gosu Cave is a vast limestone cave, and you can walk through it self-guided, following the path for about 1 kilometer. But first, we walked upwards from the parking lot, past many shops and restaurants, to get to the entrance and started with the little museum, that you visit, before you enter the cave. The modern museum displayed some info on the cave and its inhabitants (bats!) and also offered some interactive elements. 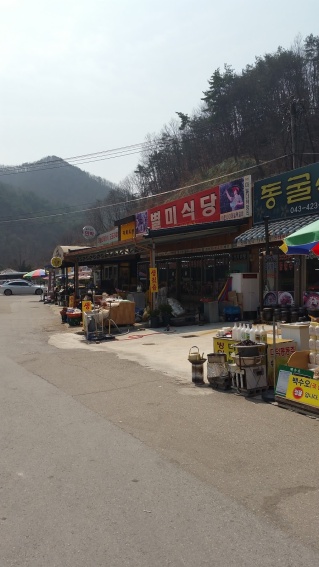 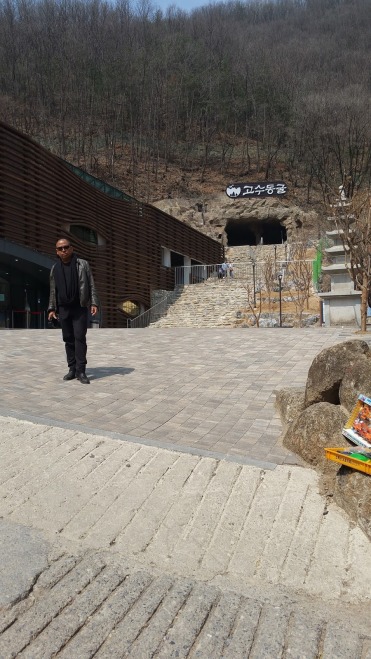 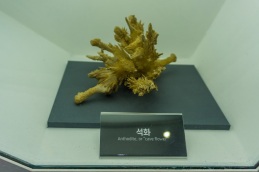 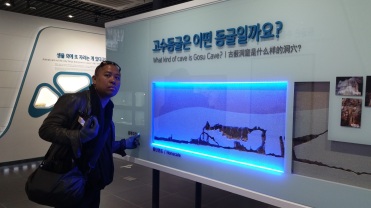 Then it was time to enter, and we soon were in the dark. It was really great – we walked up and down through the cave, sometimes through rather narrow passages and there were plenty of impressive limestone formations, stalactites, and stalagmites. There weren’t many people, so it was relaxed and a little adventure. The cave alone is reason enough to visit Danyang if you ask me. 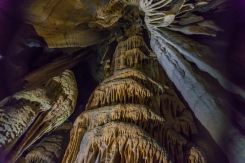 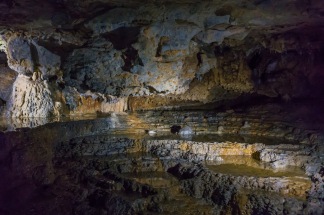 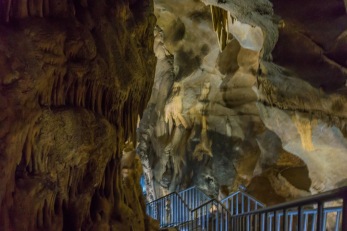 We have seen some caves before, and this one is – in my personal ranking – really close, behind the (World Heritage Site) Skocjan Caves, we visited in Slovenia last year. And equally amazing as the vast Postojna Cave in Slovenia. Of course, coming from Palawan, the magnificent Underground River in Sabang, Philippines will always be my favorite.

When we were finished touring the cave, we could keep the gloves, we were given at the entrance as a souvenir and then went to a local restaurant, where I tried to order a meal without understanding or speaking Korean. The Korean meals are, however, always a potpourri of different dishes, so I eventually got something of everything and some of it was delicious and some of it “interesting.” 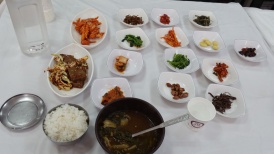 We were ready for more sightseeing and had planned to walk towards the city to the Danyang Bus Terminal and take a bus from there to the Dodamsambong Peaks. But we found a taxi at the parking lot at the caves and used the opportunity. It actually cost less than the taxi from the train station to the cave and saved us a lot of time (and worry about the correct bus).

The Dodamsambong Peaks are spectacular stone peaks, rising out of the Namhangang River. There are plenty of excellent photo opportunities, restaurants, and a little park. You can also take a boat tour from there. It is a beautiful area. 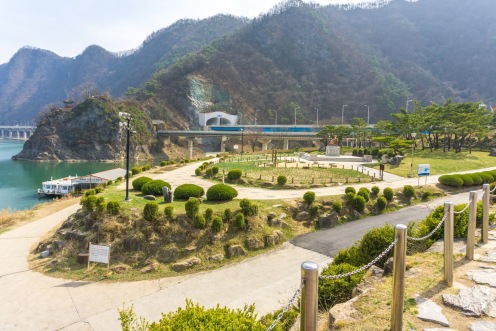 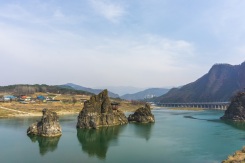 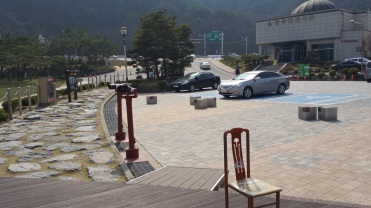 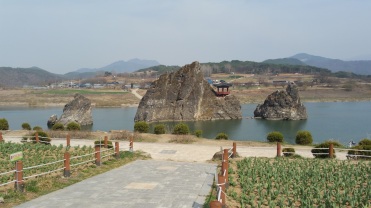 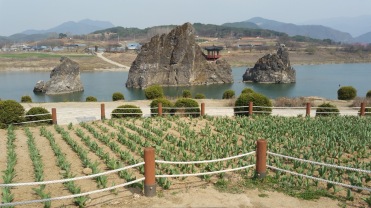 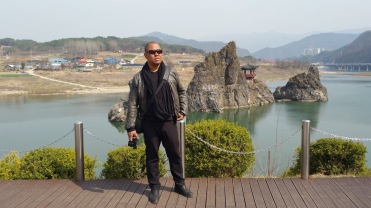 While we saw a bus stop at the main road, it looked somewhat deserted and so (there were no taxis), we decided to walk back to the town center. They seem to continually improve the tourist infrastructure in Danyang, as we already had witnessed with the new train station. And when we started to walk back along the river, we did so on a (fresh looking) bicycle and pedestrian lanes – really lovely. It was about 3,3 kilometers to walk from the peaks to the Bus Terminal. 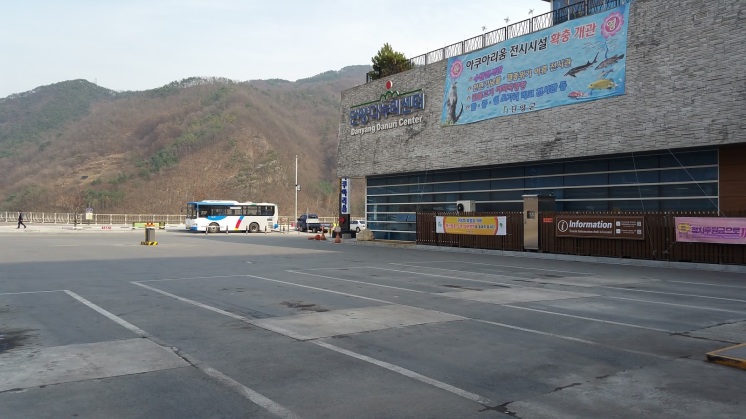 We decided to take the next train back to Andong at about 5.15 p.m., as the next one after this would depart at 10.30 p.m. (we had checked the departures before online). Unfortunately, it was too late to also visit the (spectacular looking) Guinsa Temple. We’ve been to one fantastic looking mountain temple before, the Quanhua Temple in Taiwan and even – just a few days back – the Seokbulsa Temple in Busan. The bus to the Guinsa Temple leaves from the Danyang Bus Terminal, and there was even information in English for it. With more time at hand, we would also have visited the Ondal Tourist Park with the Ondal Cave.

However, we still had about an hour left and so opted for the Danuri Aquarium, which is just a few meters away from the Bus Terminal. At first, we nearly didn’t enter, after a very pushy tourist guy from the aquarium kind of aggressively wanted to get us in and take us on tour. At first, we weren’t even sure, if he’s really from the aquarium, as we hadn’t yet entered. It wasn’t the only time that something like this happened. We actually had it three times during the trip that, older Korean men from tourist sites were kind of pushy: “you come with me, and then I will show you this, and then we go there…” without even asking. It felt uncomfortable, and I really don’t like that. He left shortly after as I was making a face to my friend saying I don’t like to go inside to the aquarium. With some time at hand, I understand that my companion wanted to visit the place but made sure that it was not my idea. 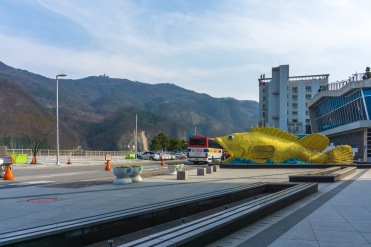 The Danuri Aquarium is actually really lovely, modern and offers much to see. It started with Piranhas, and then it focused more on Korean species, which I liked. They also have frogs and other Amphibians. It is actually so big that we had to hurry a bit, as we still had to get to the train station in time. 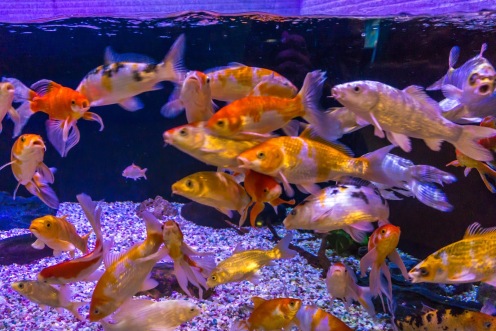 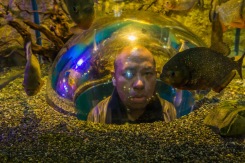 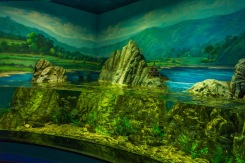 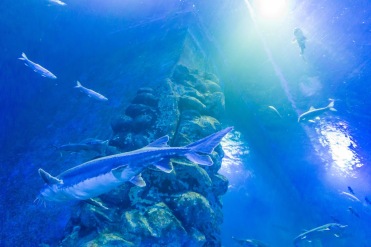 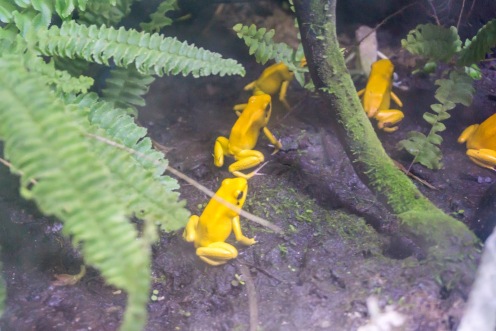 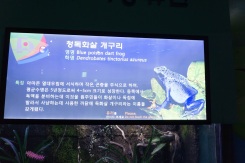 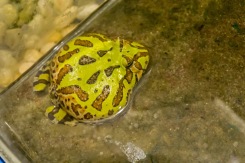 From the aquarium, we walked to the Bus Terminal, where we found taxis lined up. We took one and were soon at the train station. When we wanted to get a ticket with our Korean Pass, it was a problem, though. Maybe it was the language barrier, but we understood, that we could get only standing tickets for our pass, no seats. Because we had used the pass, which was supposed to be valid the whole day we thought, already for the train ride from Andong to Danyang. We didn’t want to stand for more than an hour and bought regular tickets, which cost about 5 Euro per Person. As I said before, I wouldn’t purchase the Korean Rail Pass again.

Back in Andong we were hungry and walked from the train station to the Jjimdak Alley, the “Steamed Chicken Alley,” where we got, well, steamed chicken. We reached it, by following the Nammun-ro into the West. The steamed chicken, a local specialty, was delicious. We were sitting in a little restaurant on the floor, and it was really much, we got. 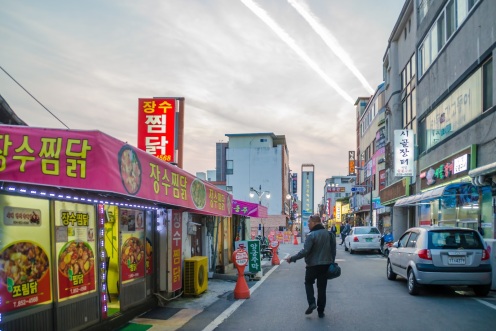 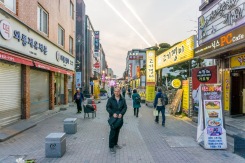 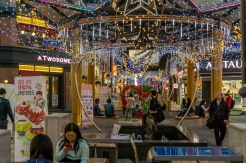 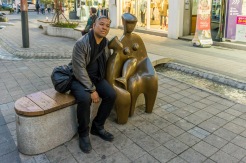 Of course, we couldn’t walk after that… We decided to take a taxi to the Woryeonggyo Bridge, Korea’s longest wooden footbridge, which is illuminated in the evening. Originally we had planned to take the Bus 3 from the train station to the Andong Folk Museum and then walk through Andong Folk Village and cross the bridge and get the Bus 3 back into town from the bridge (or walk for about 3 kilometers along the river). But we had too little time, and all was closed already. So, we had asked the taxi driver to wait for us, while I took some quick shots of the illuminated bridge. There was the drama afterward since I wanted to stay a while to shoot long-exposure shots, but my companion hurried me up. He told, rather let the taxi wait, and it was not even five minutes at the site, and I was hauled again to ride the taxi back. The cab would have expected for customers anyway since it seems like we’re the only ones there without our own car. I’ve already prepared myself to walk back 3 kilometers.

We really needed another day for Andong, which is not just a base for attractions but offers plenty of sights of its own. Still, we had to get back to the hotel and start packing, as we were leaving in the morning for our next destination, Daejeon.