After visiting Daejeon’s museums the day before, today we would go out into nature. A significant reason to come to Daejeon was its proximity to other attractions. We had planned to go to the Songnisan National Park and read that buses going there depart from the Intercity Bus Terminal, which seems to be reachable from the Daejeon Train Station by taking Express Bus 2. But we also wanted to go to Daedunsan Provincial Park.

We decided for the latter and walked from the Good Morning Residence Hue to the City Hall Subway Station and after a short ride alighted at the Seodaejeon Negeori Station, Exit 3. From there, we walked a few meters to the west to the bus stop, took the Express Bus 1 and exited at the fourth stop, just before the bridge. From there, it was a few steps to the south, when we already saw the bus stop for the Bus 34 to the Daedunsan National Park, along the street at the left. It departs from the Daejeon Seobu Intercity Bus Terminal. We thought we were too late, but the bus just came, when we got there. It was rather empty, and we could even use our convenient T-Money Card to pay, which we had also used for the subway and the Express Bus. 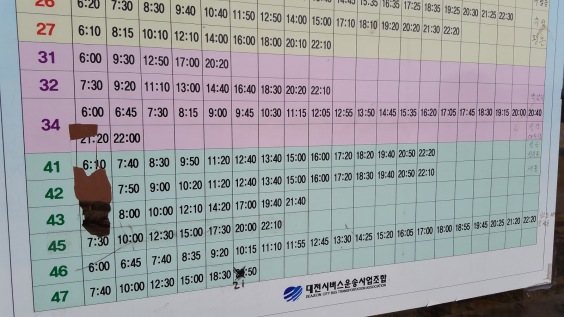 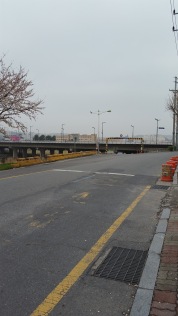 The ride took around 50 minutes, so I had time to sleep. Fortunately, the bus stop for the Daedunsan National Park is unmissable as it is the last stop. The bus stop is also just at the massive gate of the park. This makes the park an easy target for foreign tourists who don’t speak any Korean. From the bus stop, where you also find a restaurant, we walked through the gate and had to follow the highway for about twenty minutes and then walked into the first street to the right. There, we came to a tourist street with a lot of options for food and souvenirs. We skipped that and directly walked forward to the cable car. 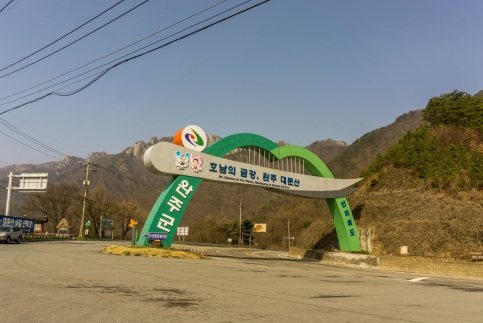 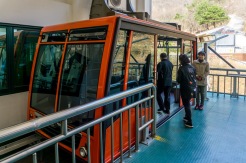 It was still early, so it wasn’t crowded yet. We quickly ascended and soon found ourselves high in the sky. There is an excellent view from up the mountain. It was just a short walk, with quite some stairs, towards a major attraction: The Geumgang Gureum Bridge. It is not really meant for people with acrophobia, but at least I managed to walk halfway onto it. My friend walked over to the other end and wanted to brave the steep stairs, but backed away from the final section going to the top of Samseon stairway. But even if you don’t go all the way up, there are plenty of photo opportunities. 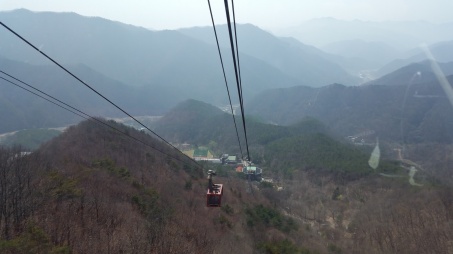 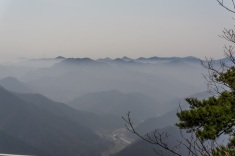 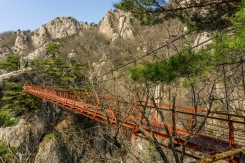 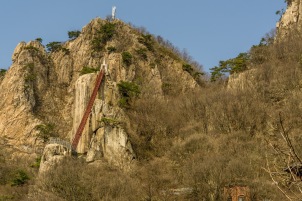 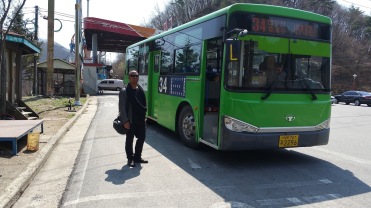 Eventually, we walked back down to the cable car station. When we arrived there to take the cable car back down, there weren’t many people, but then a group of mostly older women came, and in the end, we barely made it into the cable car, as they all were somehow storming into it when it arrived. This probably wouldn’t have happened in polite Japan!

We walked back to the bus stop and manage it on time as the bus was already waiting. Soon – actually after a bus ride, an express bus ride and a ride on the subway and a walk – we were back at the hotel and rested a bit. But we wanted to visit another attraction of Daejeon, an instead relaxing one, the Yuseong Hot Spring area.

We took the subway to the Yuseong Spa Subway Station, took Exit 7 and first walked to the nearby Yuseong Hot Spring Foot Bath at the first street to the right. As we still wanted to go into a real hot spring bath, we just took a look and then walked back the road and followed it into the west to the vast You Sung Hotel, the Yuseong Hot Spring. 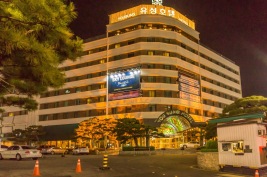 Like Hurshimshung, that we visited in Busan, it is a gender-segregated complex with several pools with different temperatures (ranging from boiling to cold), where you have to bathe naked, and also saunas. It is a bit smaller than Hurshimshung, but the atmosphere was very relaxed. We were just not used to being chatted up in the sauna naked, but a Korean guy noticed us, the two foreigners talking (actually in German), so he tried to chat us up. But it was actually a nice small talk.

The area is really colorful at night, we realized when we walked back to the subway station. It seems to be a nightlife center, but we needed to pack our bags and then get some sleep, as we would continue our journey the next day, heading to Jeonju, South Korea’s “Food Capital.”