After having breakfast at the hotel in Bodø, which by the way cost extra, we went to the ferry pier with our luggage. It was just a short walk, and after some waiting, we could get on the ferry and buy the ticket for around 20 € only at the entrance to the ferry. The ferry connects Bodø with Moskenes on the Lofoten, and the trip took about three and a half hours. It was a beautiful trip. The ocean was calm, and the sun was shining, and some people even used the chance for sunbathing, as we could sit on the deck outside. After some time we saw the impressive mountains of the Lofoten. 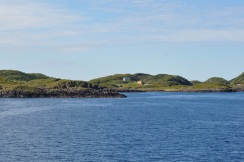 In Moskenes we wanted to take a bus to our first destination on the Lofoten – the very concisely named “Å“. But we didn’t have to wait for the scheduled bus, as there was some kind of private Mini-Bus going to Å waiting for ferry passengers. That was great because we were a bit afraid to be stranded in Moskenes without a car. Especially because at the ferry pier there´s not much to do and see beside the tourist information, the bus station and, well, the ferry pier. It was not exactly a town, but not having a car turned out to be no problem at all.

It was just a short ride from the ferry pier to Å i Lofoten and in Å we could easily walk to our room that we had booked – a “Rorbu“, that was located directly at the water. The Rorbu from Feskarbrygga was just a dream. We had the room “Hovedsmann”, and it had a huge living room with kitchen, bathroom and bedroom and we could sit outside. But more important was the atmosphere of the place and the house itself as well the location at the water and the little harbour, looking up the huge mountains. We loved it – it turned out to be the favourite accommodation of our whole journey! 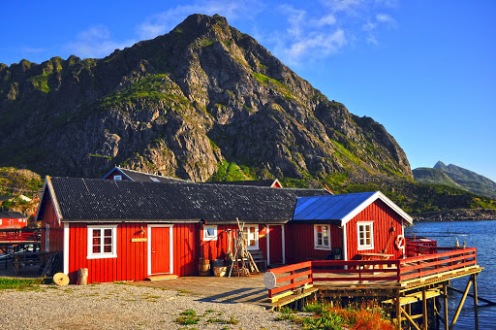 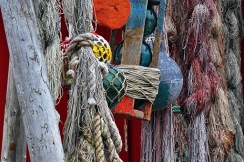 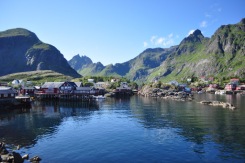 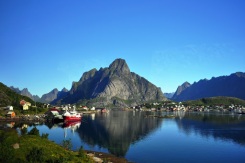 On the internet, we had found a “Rutehefter”, the schedule for the buses on the Lofoten. And while it was already afternoon, we decided to use the rest of the day for a first excursion. So we took a bus from Å to Ramberg, which is about one hour away by bus. The major attraction of Ramberg is its sandy beach. After a scenic bus ride, we found ourselves in Ramberg, which had a little “in the middle of nowhere” feel. It was great, and we walked around through the landscape and finally along the beach. We couldn’t swim. Even in August, it was way too cold – it is above the Arctic Circle. We just dipped our feet into the ocean, and it already felt like freezing, before we relaxed on some rocks nearby. We had some time because the next bus back to Å was scheduled for 9.40 p.m. We still skipped hiking up a hill. But the trail we had read about didn’t look like what we’ve imagined. It seemed much steeper and really difficult to climb.

The area was breathtaking anyway, with the low hanging clouds in the mountains, the sea and the little houses in the landscape. When the bus finally came and took the tourists from Ramberg, which was only us and an Asian mother-daughter team – it was still not really getting dark. 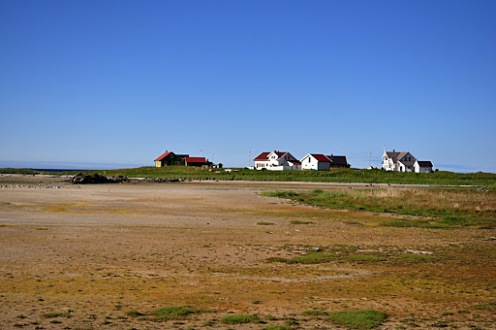 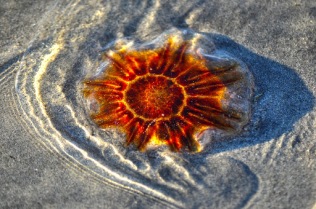 Back in Å I just needed to get my tripod to do some long exposure shots in the middle of the night (which by the way not dark) of the harbour and the beautiful little village of Å. 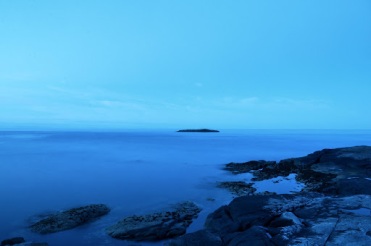