After eating through an excellent breakfast buffet at the Hotel Astoria in Bled, where they even had fresh pancakes, we took a regular bus at 8.20 a.m., operated by local bus company Alpetour. Fortunately, the central bus station in Bled was just a few steps away from the hotel, and it took us only about 40 minutes to reach the bus stop “Zicnica Vogel K.” The latter is the bus stop for the Cable Car, leading up to Mount Vogel.

As there were no announcements for the stations inside the bus, we tried to keep track where we are, as we knew it was three bus stops after the Bohinj jezero bus stop at the Lake Bohinj. The bus line is really great, as it leads from Bled directly to Lake Bohinj, further on to the cable car. Some of the buses go as far as Slap Savica bus stop (at least in the summer), which is the last stop and the starting point for the hike to the Savica Waterfall. You can also check out their timetables online before the journey so that you can plan ahead.

From the Zicnica Vogel K bus stop, we followed the (road) signs to the base station of the Cable Car, where we bought tickets and were soon ushered into the cabin. Despite my acrophobia, I’ve been to some cable cars before, like the ones in Miyajima, Japan, in Tromsø, Norway or at the Sun Moon Lake in Taiwan. But this was by far the steepest cable car I’ve been in, as it quickly goes up to 1535 meter above sea level and at some point, I had to put my sunglasses on and just close my eyes… 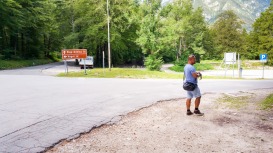 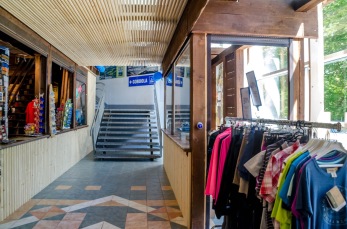 The vertical climb would have been about 800 meters, but the cable car brought us to that height in just about under 10 minutes. It’s exhilarating going up, and it seems like forever for me inside the cable car, but once on top at the station, the panorama is just priceless. Mount Vogel is just opposite of the central Julian Alps. Around the plateau, you can walk around even with small children. 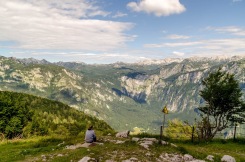 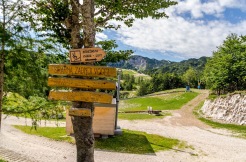 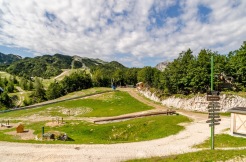 We actually didn’t plan for long hikes there, as we wanted to see more sights in the region and just had one day for it. Therefore, we expected to just walk the shorter “Vogel Trail.” We followed the signs we saw but were not so sure if we really walked on the right trail. However, we didn’t go that far and still had the chairlift in sight, so, there was no danger of getting lost. Even then, due to the hot weather, we were already sweating profusely, but we made it back in time down and to the bus stop, where we took the bus onwards to the Savica Waterfall. It was a short time at Mount Vogel, but very rewarding. 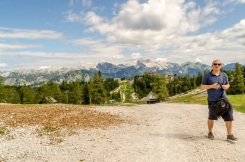 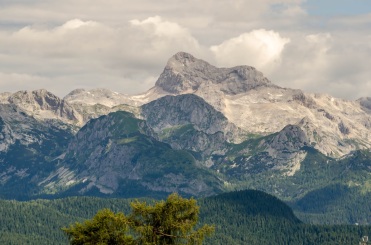 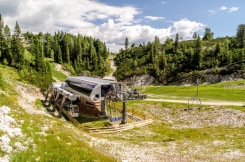 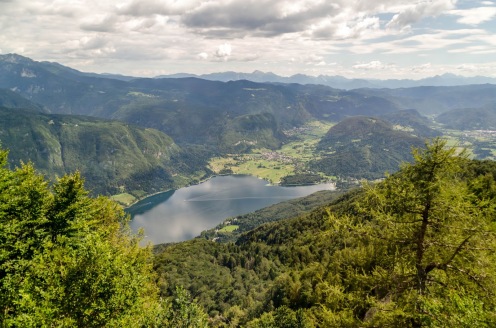 The Alpetour-bus brought us quickly in about 10 minutes to the Slap Savica bus stop, where we found a restaurant area and the entrance to the path up to the Savica Waterfall. You can also take the bus just to Bohinj Zlatorog bus stop at the western side of the Lake Bohinj and walk up to this area from there. After I had some fish outside at a restaurant, we started the short but exhausting walk to the waterfall up the stairs. Everyone who finally arrived at the end of the trail at the waterfall was soaking wet with sweat due to the heat. It was somewhat crowded, but it is a beautiful waterfall. 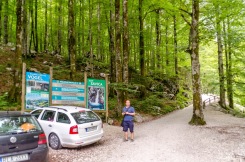 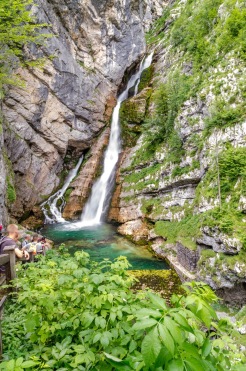 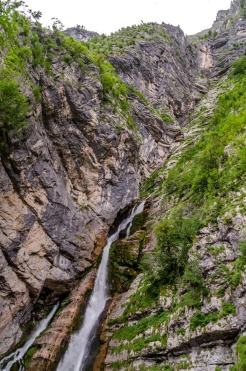 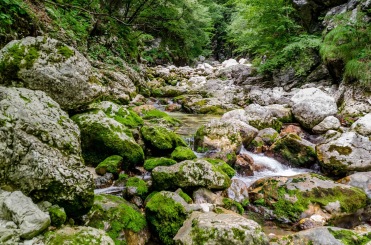 We walked back down to the restaurant area and, after some re-orienting, found the path that leads us down to the Lake Bohinj. It took us about 45 minutes until we crossed the beautiful river and reached the Bohinj Zlatorog bus stop in the village Ukanc. From there we walked to the Camp Zlatorog and then through it to reach the pier for the Tourist Boat. While you can also take a bus to get from Ukanc (at the western side of the lake) to the village Ribčev Laz (at the eastern side of the lake), the boat seemed to be a much more excellent way to do so. We were a bit early, so I even got a chance to cool off my feet in the lake, before we departed for a relaxing tour with magnificent views of the Lake Bohinj. 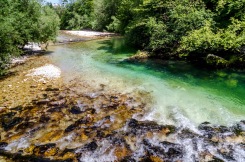 In Ribčev Laz, we, of course, had to cross the old stone bridge to visit the beautiful Church of St. John the Baptist, which is over 700 years old and beautifully located overlooking the lake. 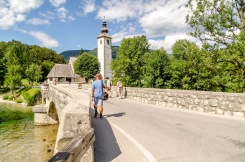 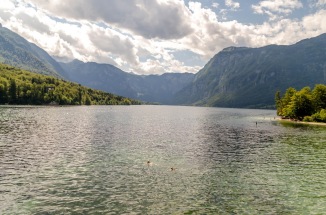 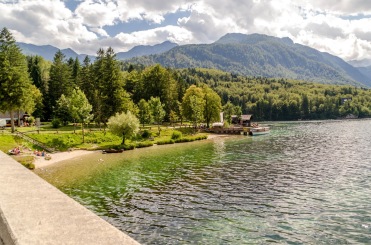 We actually had planned to do another hike – to the Mostnica Gorge. We wanted to walk from the church to the nearby village Stara Fužina and enter the trail there for the gorge. Stara Fužina is also home to the Alpine Dairy Museum. Unfortunately, it was getting late. We were a bit exhausted, didn’t want to take the last possible bus back to Bled and therefore skipped the hike. At least we had seen the Vintgar Gorge the day before. However, one sight was still likely. At the Bohinj jezero bus stop in Ribčev Laz, we found the Monument of the Four Brave Men, which honors the first ascent to the summit of Mount Triglav. 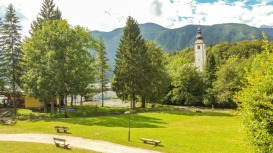 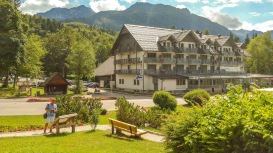 Finally, we took the next bus Alpetour-bus back to Bled, where we relaxed a bit in the hotel before we walked to the nearby Lake Bled, which is also very beautiful in the evening. We had dinner in one of the many restaurants, which took about an hour to arrive at our table, but was delicious. 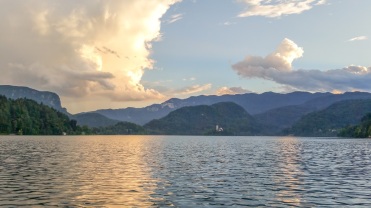 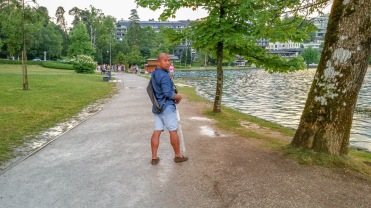 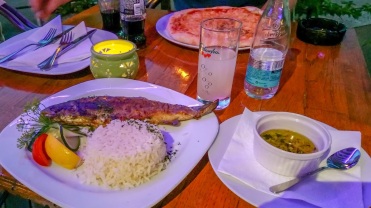