El Nido is a small little pleasant town with many small streets. It has an established tourist infrastructure, but unfortunately, there is still no ATM (machine), so we brought enough cash to be on the safe side. As far as I’ve heard that the local government is gearing towards getting more tourists to come. There was even a plan to dredge out the bay for bigger ships to dock but the locals disapproved of the plans and eventually, it got shelved. Many people, however, has been talking about making it the next Boracay. I personally have nothing against development, but the locals should be careful on what types of tourists and tourism activities they wanted to attract. It needs a lot of careful planning to make it sustainable and keep it green.

Contrary to what people have heard, it is still quite affordable to visit there. The high-end resorts are mostly located on the islands around Bacuit Bay. 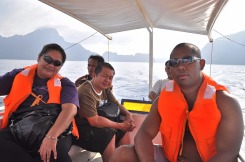 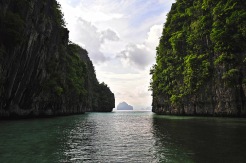 We woke up at 7:00 o’clock the next morning and immediately launched to our much-awaited island hopping tour along with my friend Daisy and her two colleagues. We rented a boat for 2,500 Pesos, and we had it for ourselves; we are at liberty to island-hop at our own pace. Our boatman docked just right next to our hotel. First off, we went to the Big Lagoon, Small Lagoon, Secret Lagoon and Miniloc Island to snorkel. Everything is fantastic – the subaquatic biosphere, the limestones and the beaches. The colourful fishes came and kissed my legs esp. when we fed them with bread. Then we went to Simisu Island where we stayed a bit longer to snorkel and feed more fishes. 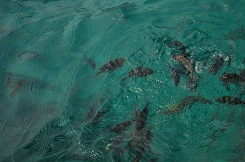 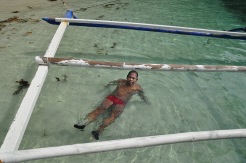 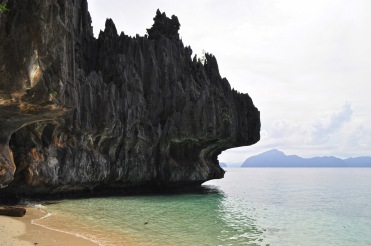 We decided we all had enough, so we asked our boatman to take us back to town. We wanted to get back to Puerto Princesa not so late, so off we drove after getting some lunch at a small eatery. We arrived around 17:30 (5:30 p.m.) and checked-in again at our favourite hotel, the Hibiscus Garden Inn.

I called up my nephews to pick us up from our hotel and took us to Golden Valley which is about 20-30 minutes tricycle ride from town. The trip around town gave us another glimpse of the city and city life where a regular tour would not afford. We stayed just briefly at my eldest sister’s place to give some gifts. Then off again to the second sister and did the same. We were so tired from the long drive from El Nido. Back to the hotel, my friend was so beat up and decided to just rest while I went out to meet a good friend of mine, Teng of Palawan Today, for dinner at Neva’s Place. It was a short sleep and up again at 5:30 a.m. to go to the world heritage site, Puerto Princesa Underground River.

The Municipality of El Nido is composed of 18 barangays (villages) covering a total land area of 50,000 hectares. Its population of 27,000 people is a combination of native Palaweños, with a heavy presence of migrants from other parts of the Philippines. The world’s largest pearl was discovered by a Filipino diver in a giant Tridacna (mollusk) under the Palawan Sea in 1934. Known as the “Pearl of Lao-Tzu”, the gem weighs 14 pounds and measures 9 1/2 inches long and 5 1/2 inches in diameter. As of May 1984, it was valued at US$42 million. It is believed to be 600 years old.