We had to leave the Sjohus Senteret in Sortland very early in the morning because our bus to Harstad leaves at 6:45 a.m. We had pre-booked the taxi already but were now standing there in front of our cabin and waiting, but no cab came. We didn’t have the number of the cab (we had just talked to him upon our arrival in Sortland), and the central bus station was very far away, especially with heavy luggage. To be on the safe side, we got up early enough. It was just 6 a.m., and so, when it dawned on us that the taxi’s not coming, we rushed to the road with our luggage. We walked through the blue Sortland in the middle of nowhere and managed to be in time at least at the bridge, where you can stop the bus before it crosses the fjord. Then a bus came, and it had a different number than what we had read from our internet research, but we stopped it anyway, and it turned out to be the right one. We were so happy because if we didn’t get the bus, we would also have missed the ferry from Harstad leaving at 10:15 a.m. to Tromsø, which was our primary destination.

The bus was basically empty, and we had a short stop in Lødingen. When we arrived in Harstad, it wasn’t far to the ferry pier. We even walked past it because there seem to be two piers. I asked one guy going the other way, and it happened to be an Englishman who lives there in Harstad. There was enough time for a little coffee at a very cosy and stylish waiting area. There, one could already see that Harstad is rich, thanks to the oil they found. Everything was new and shiny – just like the ferry which turned out to be equally lovely. The pleasant ferry ride leads for about two and a half hours through magnificent Fjords along the islands and mountains with a short stop in Finnsnes. 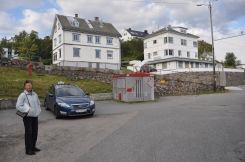 Finally, we’ve reached Tromsø in the early afternoon, our final destination. Tromsø is the biggest city in northern Norway, and we chose it as part of our tour, not only because it looked great on pictures and it has the ferry connection to Harstad, but also has an airport with flights to Oslo. It is far above the polar circle, and the central city is basically an island in the middle of mountains. You can also continue from there up to the North Cape, but unfortunately, we didn’t have time for that.

We booked a room in the AMI Hotel, which at around 80 Euro was a relatively cheap one for Norway. On paper, it didn’t look that far away from the ferry pier. What we didn’t see was that it’s located on a hill. The location still was excellent, and the city centre is just a short walk away from it. The hotel itself was pleasant enough, and we got a spacious room good enough for a group of 4 (with four beds), a refrigerator, flat-screen-TV and a beautiful view. The bathroom and the toilet had to be shared with the other guests on the floor though. 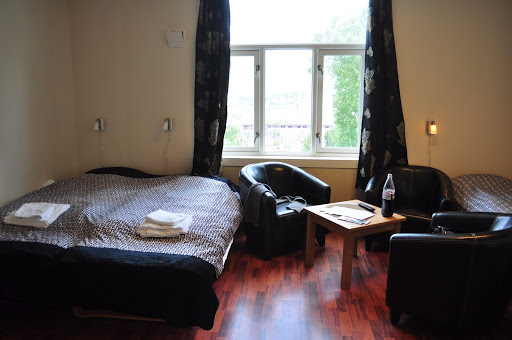 The first attraction we wanted to see – and Tromsø has many – was the Polar Museum. There you can see some of Tromsø’s history as the gateway to the arctic for expeditions and hunting traditions. 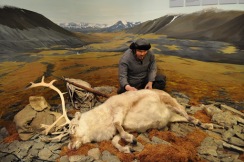 After that, we crossed the massive bridge to the mainland, where the architecturally unique Arctic Cathedral is located. You can also take a bus, but walking was good after sitting all day on the bus and ferry. From there we continued to the cable car and went up to the mountain Storsteinen. There was a great view of the city, but it suddenly became foggy as soon as we arrived on top of the mountain. That actually made it even more atmospheric, a different charm. But it also slowly cleared away after around 20 minutes. We went down with the cable card afterwards. One can actually walk down, but we didn’t want to because it’s getting late and we’re afraid to lose our way. After that, we took another look at the beautiful Ishavskatedralen, the Arctic Cathedral, before we grabbed something to eat and went back to the hotel. 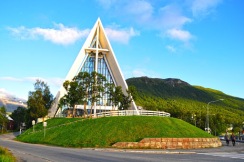 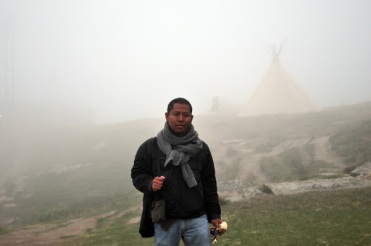