We took our time at the breakfast buffet for some delicious Slovenian pancakes at the Hotel Astoria in Bled, as we were in no rush today. We planned to visit some settlements in the region, to get more insight into the culture and history of the region. And the Hop-On-Hop-Off-Bus, which lead to these, was “only” leaving at 9.30 a.m. from the central bus station in Bled, just a few meters away from the hotel. This bus is only operating in the summertime and only on select days.

Our first destination with the bus was Kropa. It was great as the ticket for the bus included a free guided tour in Kropa. Kropa, with an attractive river, canals and a long history of metalworks is a charming settlement in the municipality of Radovljica in the Upper Carniola region. Our guide told us about how people lived here in the past and about the history of Kropa, while we walked through it. Fortunately, the “Scheißegasse” (literally “Shit Alley”) isn’t in active use anymore. 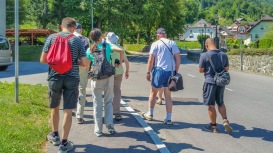 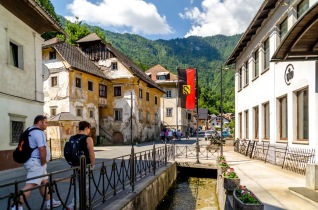 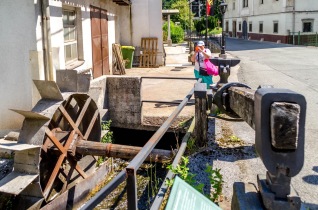 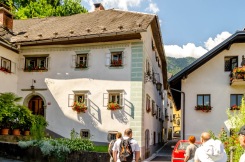 It is interesting to note that Kropa was once a major “industrial center.” It kept the features of a Krainer iron processing. As far as its technical, cultural and historical monuments are concerned, Kropa is one of the most important historical places in Slovenia. It has been protected as a cultural monument since 1953. At the end of the tour, our guide took us to the attractive Iron Forging Museum, where we learned more about the history of Kropa and iron forging. They also have a lot of artifacts on display. I especially liked the iron masks and the iron dragons. At the end of the visit, you even get a musical surprise. 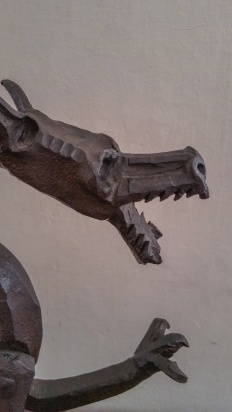 When we were finished, we had enough time to go to the nearby Vigenjc Vice Blacksmith, where we could witness the process of nail forging, and some fellow tourist tried out for themselves. We had coffee afterward sitting outside at a canal and after buying grapes at the small local supermarket at the bus stop, got on board the next Hop-On-Hop-Off-Bus, this time alighting at Radovljica. 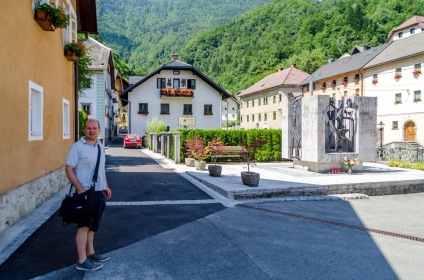 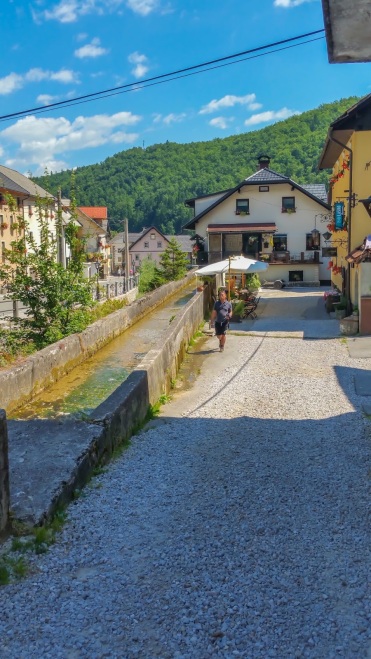 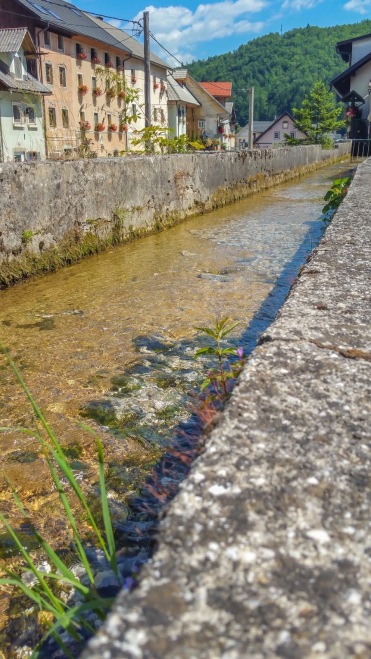 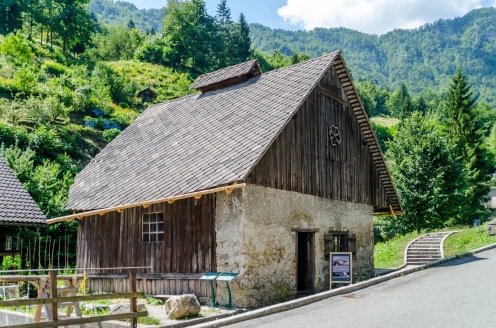 Radovljica is a small town, and what iron forging is to Kropa, honey and gingerbread are to Radovljica. From the bus stop in Radovljica in the Kranjska cesta, it was just a short walk to the southeast to the Old Town at Linhartov trg. It offers lovely old houses and also three interesting museums. 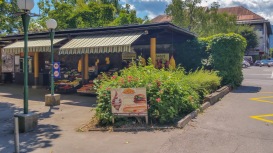 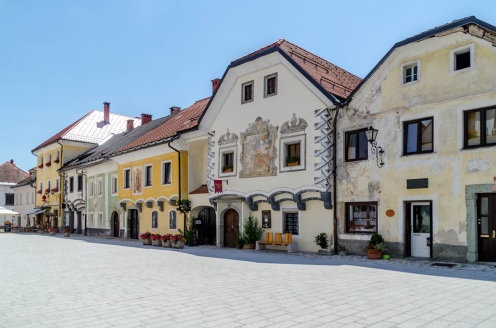 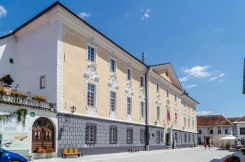 The first museum we went into was the Museum of Apiculture, where we learned about the history of beekeeping through many artifacts on display (like a lion-shaped beehive and the most extensive exhibited collection of painted beehive panels), information and even a short movie. There’s also an observation beehive with live bees. 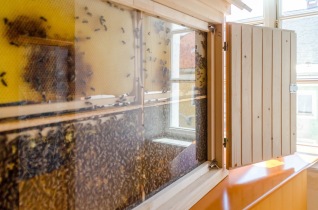 The Municipal Museum of Radovljica is connected to the Museum of Apiculture, and so we didn’t have to walk far to the next attraction. The museum highlights Anton Tomaž Linhart, the father of Slovene theatre and scientific historiography. I have to admit, the bees were more interesting. 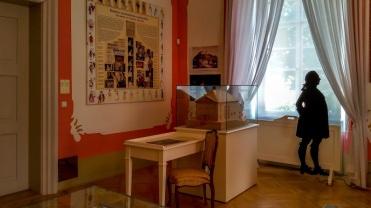 Just a few houses further we entered the next museum, the Gingerbread Museum. Yes, there is actually a museum about gingerbread! It was actually in the basement and very small. Still, it was something special, as we could observe the making of gingerbread and were told a lot about how heart-shaped gingerbread once ignited marriages while seeing “historic” gingerbread and were offered to taste fresh gingerbread. Of course, we had to buy some, and they even have gingerbread-magnets. 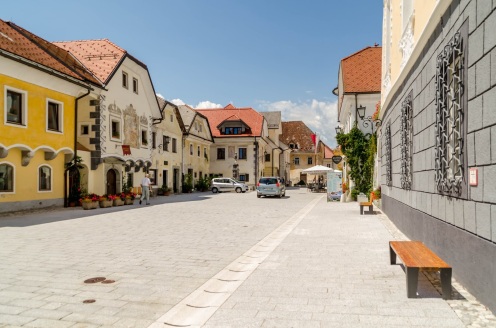 With some ice cream, we slowly walked back to the bus stop. For the next destination we couldn´t take the Hop-On-Hop-Off-Bus, so we took a local bus from Alpetour. It took us just about ten minutes to get to Begunje na Gorenjskem, which is the birthplace of the legend of Slovene popular folk music, Slavko Avsenik. We were hungry and visited the Avsenik Restaurant, where I got risotto. It looks like they have musical events there too.

Our real reason to get to Begunje was, however, another attraction, the Kamen Castle Ruins. The castle was built in the twelfth century and is a bit of a hike (2 kilometers one way) to the northeast. We basically followed the main street from the bus stop just opposite the Avsenik Restaurant. We came past the Psychiatry Hospital, where we had a short talk with an Italian man who surprised us from above the wall and asked us about our travel plans, while we were hoping the Psychiatry isn’t for the worst of cases. During our short talk, he informed us that he is a patient there. 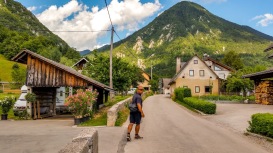 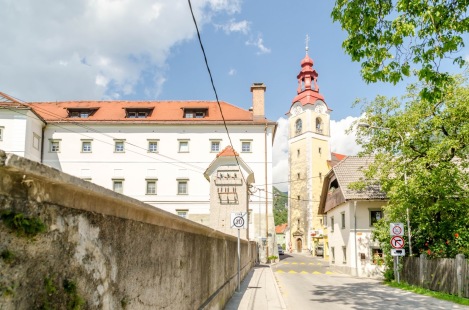 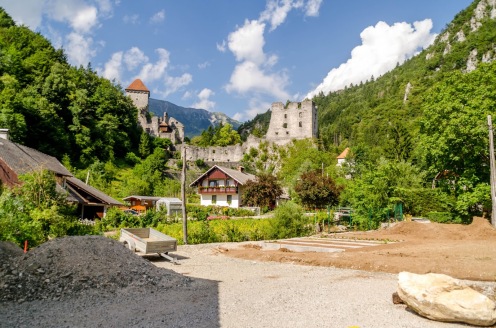 Soon we arrived at the Kamen Castle, and it is quite a sight. As we walked on a path to the ruins, we were stopped by an older local. I first thought he wanted to complain about us trespassing, but he actually told us, where to stand best to take a good shot for a photo. A nice surprise. We walked through the ruins and took our time. We didn´t really find signs for a walking path backward, we read about, so when we were finished, we just walked back along the street. There are actually many hikes in the area like the Lamberg Trail, but I think you need an excellent map for them as it doesn’t seem to have proper signage. 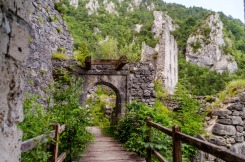 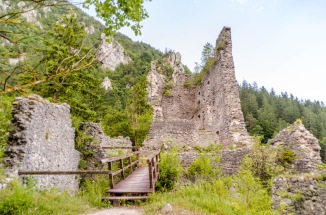 There was still time until the next bus to Bled would depart. On the way back to the bus stop, we entered the park of the Katzenstein Mansion. During the German occupation, political prisoners were incarcerated in the mansion, and today it houses the Begunje Psychiatric Hospital and the Museum of Hostages. We opted for the latter. 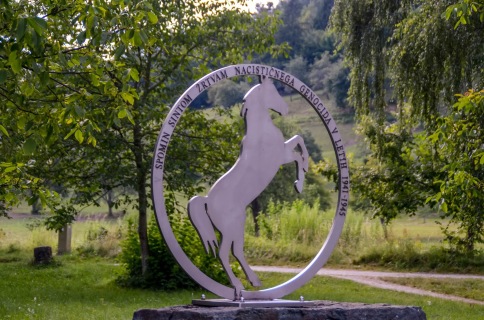 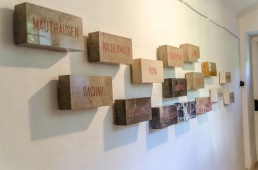 Then, we made a stop at the Church of St. Ulrich.

Soon, another bus from Alpetour brought us back to Bled, which took about 30 minutes. Back in Bled, we enjoyed a last walk along the beautiful lake in the evening, as we would continue on the next day to Postojna.