After having an excellent breakfast at the hotel, we rushed to the entrance 2 of the Park, where the first bus of the National Park leaves at 8 a.m. to a starting point for a walk through the Park. We wanted to be among the first visitors and start early because we read it can get really crowded in the Park during the peak season in summer – which later turned out to be true. The bus drove to the end of the Park from where we followed the route “H”. At the beginning of our walk, there were only a few people there, and we walked through the green landscape and blue waters of the Plitvice Lakes, seeing the first small waterfalls. They have shaped the trail nicely with a wooden ramp all through the park. The longer we walked, the more beautiful the scenery and the waterfalls became. 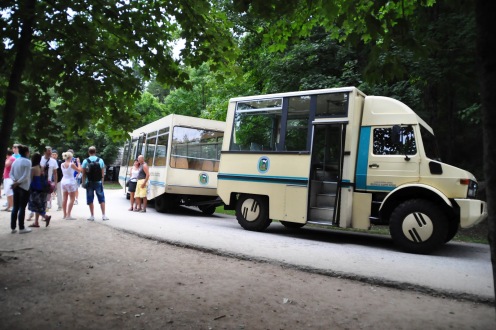 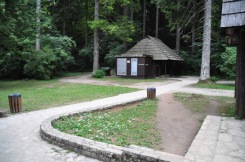 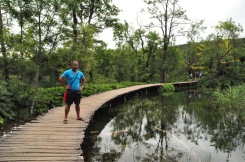 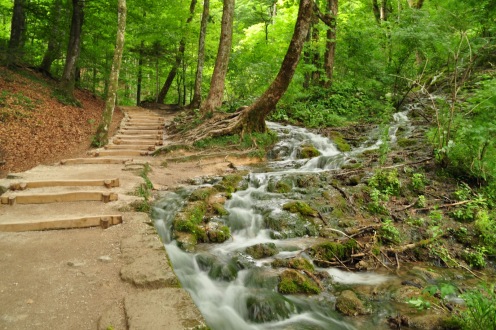 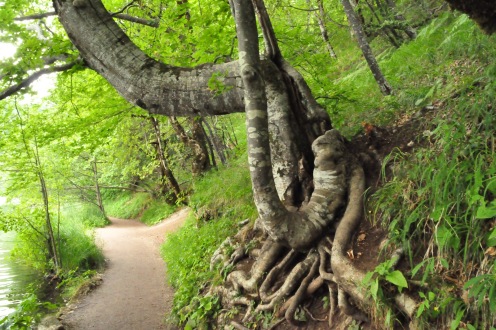 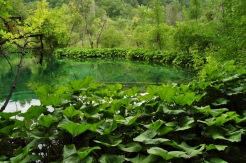 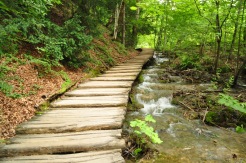 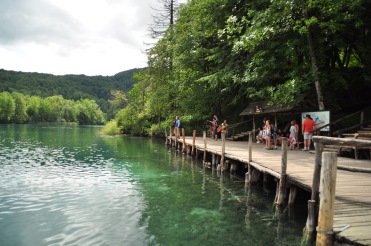 It was already noon when we finally arrived at the boat, which we had used previously the day before. When we arrived at the restaurant area inside the Park, there were already many people crowding for the boat to get to the other site where we just came from. The many day tourists seem to come mostly from entrance 1. There are actually many offers for day trips to Plitvice. But I would recommend – at least in high season – to stay there for two nights so you can have the Park all for yourself for a few hours. If you come to the Park too late, you spend much time just standing in a queue for the boats or have to concentrate more on not being pushed into the water by hordes of people. Anyway – we took a break at a grill house at the lake, where they offered roasted chicken before we continued our walking tour. 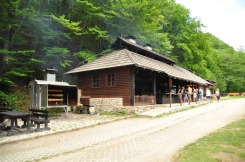 Now there were already many groups from different countries with guides holding up their signs. On the way to the biggest waterfall it was already crowded, although still beautiful. You could not stand still to take a photo on a not-so-wide-wooden walkway, or you will be pushed into the waters. Being a bit pushed ahead we didn’t realize we walked past the diversion to the bottom of the big waterfall. But at least we saw it from a distance, when we walked up the mountain. There was a great view, and at the end of the trail, we had a picture of the whole scenery from above. 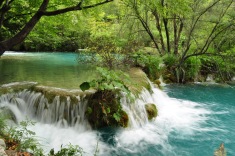 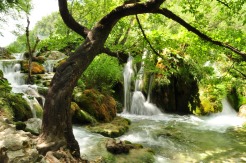 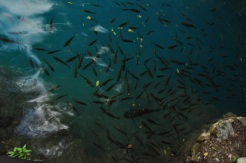 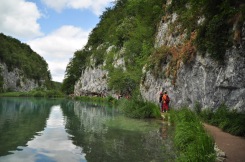 At the end of the trail, there is a bus back to the entrance 2 and another little restaurant. But we didn’t want to wait for the bus and decided to walk further. We soon realized that we were just walking back to the restaurant area of the Park, as we went down and were back on the trail we came from. So we enjoyed another coffee there. I just didn’t get the ice cream I really wanted, because the salesgirl suddenly vanished, only to come back with a sign, that she now takes her break – which disappointed a whole queue of ice cream hungry people.

We thought about taking the boat back to entrance 2, but the queue for the boat had gotten so long, that it seemed like a terrible idea. Instead, we walked back along the lake, we weren’t in a hurry anyway. There weren’t many people on the path along the lake, and it was quite idyllic. We even saw snakes in the water but thank god we saw no bears or wolves, which are said to live in the area too. One (German) guy nearly ruined my photo of a dragonfly, which I was focusing on for a beautiful shot, when he rushed to it, scaring it off, telling his children, to look at this beautiful (he said) butterfly… 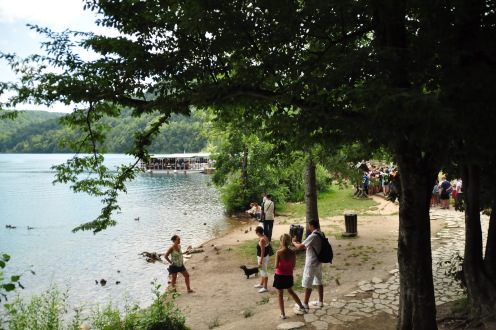 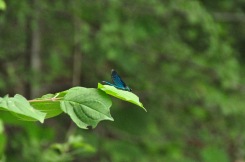 Back at the hotel in the late afternoon, we went to the hotel café, as my friend had seen a lovely cake they offer. Then he was again disappointed when his cheesecake tasted like just been recently defrosted after being in the freezer for a long time. We walked around a bit in the area and later went to the restaurant again where we went to the previous night, this time in the self-service one, which was fine enough with fish and grilled chicken, though I wouldn’t recommend the baked apple strudel.