A big reason to visit Hong Kong was to see the Big Buddha on Lantau Island. So, we started in the morning from the Butterfly on Hollywood and took the MRT to Tung Chung Station and – after a short stop at a Subway for breakfast – walked to the nearby Tung Chung Bus Terminus.

We had read before, that the cable car that usually stretches from the Tung Chung Station to the Buddha is closed until June, due to renovation. Therefore, we had looked up bus routes from the New Lantao Bus and found two options: Bus 23 from Tung Chung to Ngong Ping or Bus 11 to Tai O and then Bus 21 to Ngong Ping. We had decided, to go to Tai O first, which is a fishing village with stilt houses.

Unfortunately, we weren’t the only ones who wanted to go to Tai O and to the Buddha. When we first saw a ridiculously long queue at the bus stop, we were still in denial and thought, that it can’t be ours. Actually, we didn’t know if it was ours. We couldn’t see the end of it and to which bus it leads. But then, we thought, there won’t be a queue that long to anywhere else. For us, it didn’t matter if it was for the Tai O bus or for the Ngong Ping bus, as we wanted to see both anyway and both are connected to another bus. 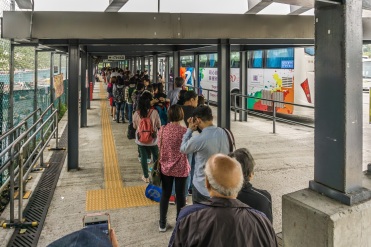 Still, we didn’t want to stand in a queue for half a day and decided to give a look at the taxi stand. It was costly, and while there were empty cabs, they didn’t seem to take anyone. The considerably shorter queue there didn’t seem to move ahead at all. So, we went back to the endless bus queue and admitted ourselves to it. After a while, when we had moved forward considerably, someone with a sign appeared that indicated, this is the bus to Tai O and the queue for the Ngong Ping bus is somewhere else. It was terrible for the woman behind us, who thought she was standing in line for the Ngong Ping bus.

Eventually, we came close to the bus departure and finally got in, after about an hour in the queue. Fortunately, we had our Airport Express Travel Pass and had thought of loading some extra money for buses on it (which you can do at convenience stores or machines at MRT stations). Therefore boarding and paying wasn’t a problem.

Soon, we arrived happily and finally in Tai O and spontaneously took a boat tour, that was offered. It was actually a short Dolphin-Watching-Tour, but they said, the boat will also cruise through Tai O, and that was, what attracted us. Riding the boat through the stilt houses was great. After that, we continued a bit to the open sea, where even dolphins appeared. I still like my first dolphin tour in Bohol more, but the boat-tour was rewarding for the Tai O leg alone. 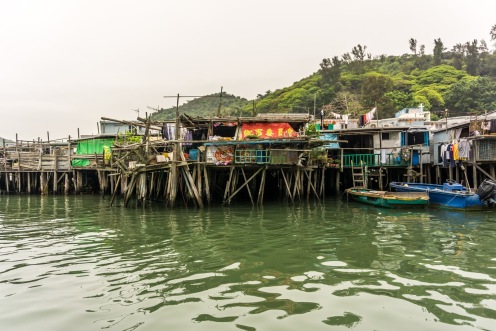 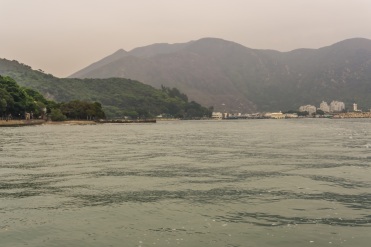 After the tour, we finally walked into the village and were greeted by many food stalls. You can eat your way through the village, from fish balls to pancakes, waffles and doughnuts. There was also a small museum (free). Eventually, we crossed the bridge and just walked a bit through the area, eating pancakes. It was quite busy but still bearable. I don’t want to know how it is on the weekend… 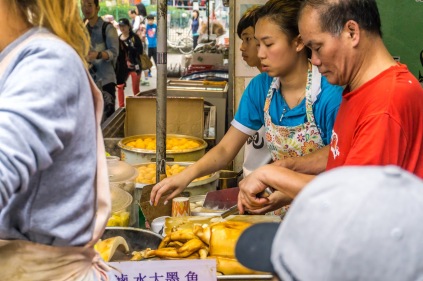 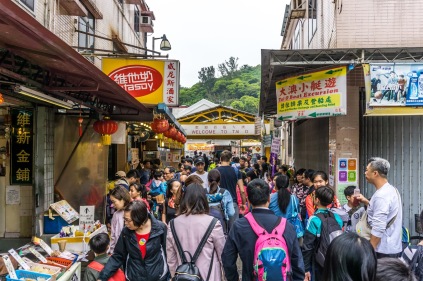 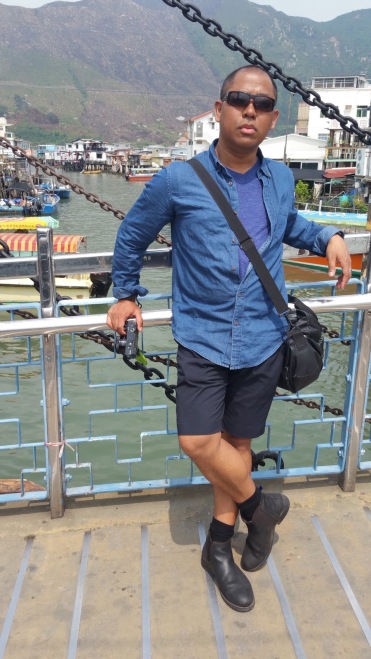 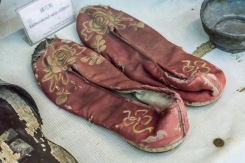 When we were finished, we went back to the bus area, where we found the stop for the Bus 21 to Ngong Ping. To our surprise, there wasn’t even a queue. But that’s maybe because most tourists go first to Ngong Ping and then come to Tai O. Another reason apparently was, that many tourists take a ferry from Tai O back to Tung Chung (at least there was a queue). However, we just boarded the bus and soon were in Ngong Ping.

Ngong Ping was easy to navigate, as there’s the main tourist street with restaurants, souvenir shops and stuff, where we went first for lunch (the pancakes in Tai O were delicious but didn’t count…). They also offer attractions like “Walking with Buddha” and a Nature Center. 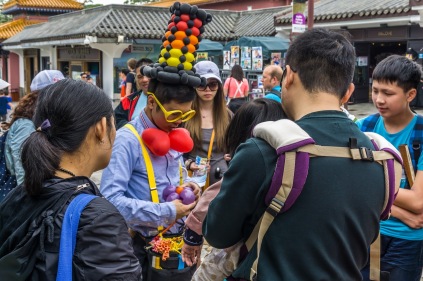 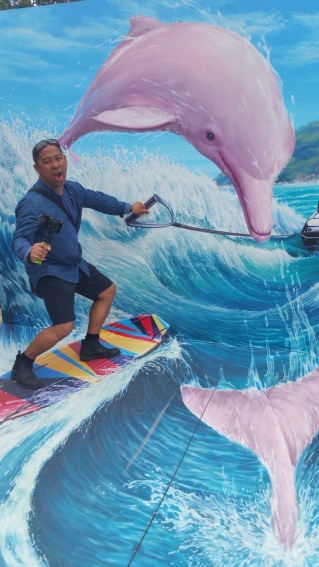 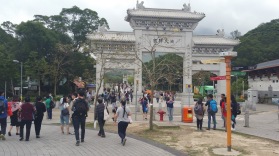 Then we came through a park with many sculptures, that led us to the stairs, up to the Big Buddha. It is a massive statue in a spectacular setting, and a must see if you’re in Hong Kong. Of course, we had to climb up! It was equally impressive as the huge Buddha statue, we visited in Kaohsiung, Taiwan. 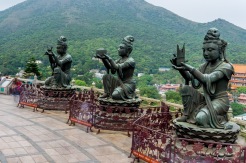 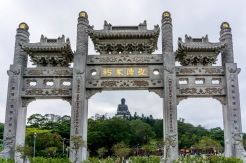 It was already getting late, but fortunately, still enough time to visit also the beautiful Po Lin Monastery, which was just a few steps away. 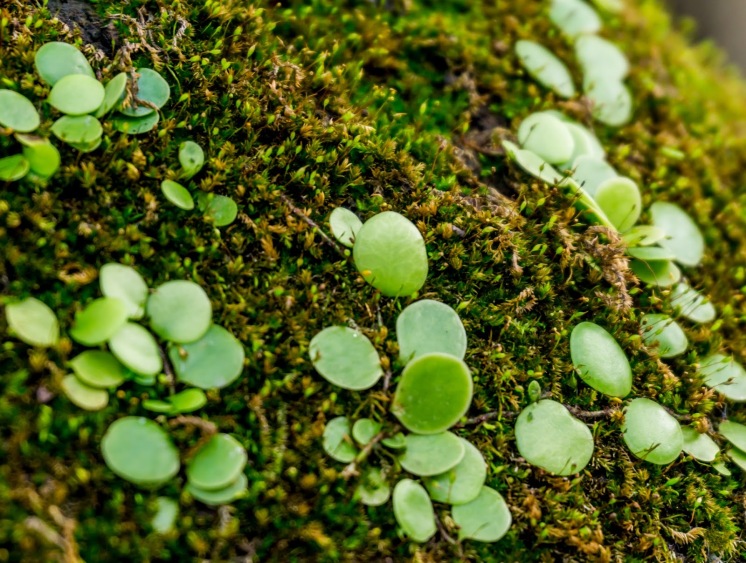 Then we continued to the Wisdom Path and were awarded by more great views (and wisdom!). 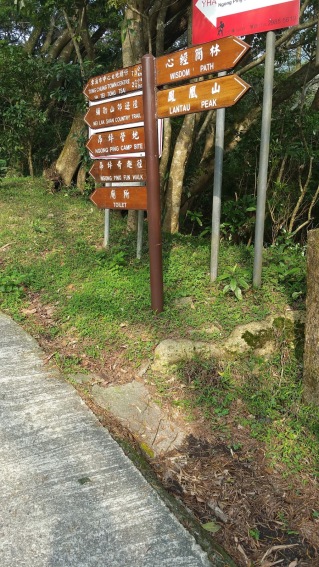 It was time to get back, as we didn’t want to take the last bus. Unfortunately, everyone else wanted to leave too, and we were back in a long queue. However, the bus company can’t be blamed, as the buses drove pretty much often as necessary and didn’t stick to the official schedule. It still took a while, but not as long as the length of the queue suggested. Eventually, we were on the bus and therefore much luckier, than the appalled people who waited at bus stops along the way, where the coaches didn’t stop, because they were already full.

Back at the Tung Chung Station, we took the MRT to the Hong Kong Station. While it was getting dark, we still were in sightseeing mood and decided to walk to the connected Central Station and went through Chater Road, where luxury shops were lined up, to the Cenotaph, Statue Square and the Legislative Council Building, built in 1912. It is quite a sight to see the old and new Hong Kong mixed together. 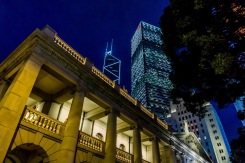 We still didn’t have enough and walked further, past St. John’s Cathedral, to the entrance of the Peak Tram. We really shouldn’t have been surprised, as it was a Friday evening, but still were, when we saw an endless queue. However, we had survived the queues in Lantau, and if we now left, we probably would never come back, so we lined up.

An hour later, we arrived at the entrance. When we entered the funicular, it was already so crowded, that we had to stand. I like funiculars. My first funicular rides were in Dresden (Germany), in Braga and in Porto, Portugal. This one was probably great too, but when you are busy not to stumble and fall, you can’t really enjoy it.

The centre on the peak was a bit of a letdown too – mostly just shops. I did, however,  like the free Trick Art Museum, where we took some photos. And eventually, when we got to the Sky Terrace, I have to say, that the view was terrific. 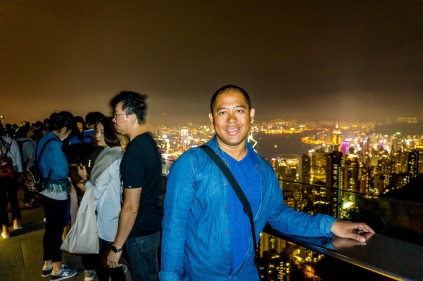 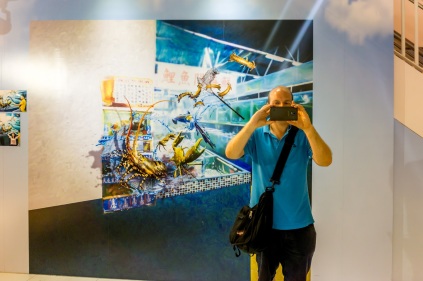 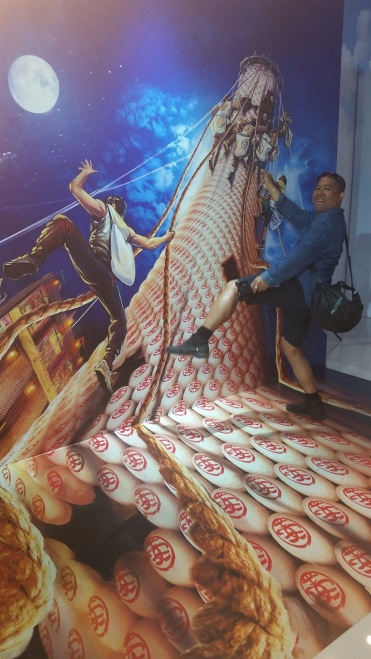 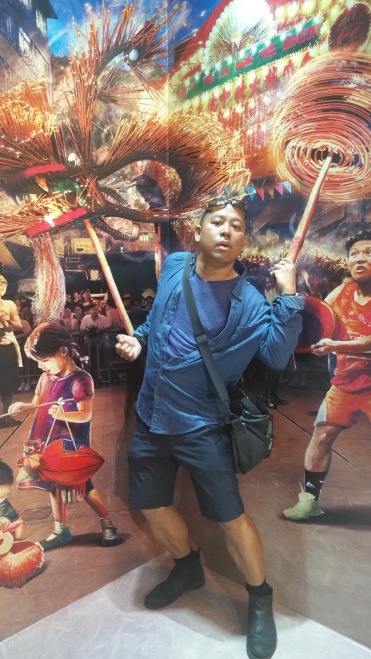 All said, it’s a great thing, but probably better not to visit not on the weekend, especially not in the evening on the weekend. If you go there during the day, there’s also the option to walk one of the Nature Walks.

After a long day of sightseeing, we wanted to go back, but there was another endless queue, so we looked for a taxi. But then we overheard a shocked woman, who had asked a driver for the price and was telling her friends. It would cost us a lot. So, we lined up again for the Peak Tram and stood for another hour, before we could return. It was kind of strange – so many people in Hong Kong seemed to be always in a rush. Still, we were waiting in queues half of the day…