After breakfast at the hotel in Pomena – they have a big buffet, which is included in the price – we decided to walk around a bit. Transportation was a bit difficult, we had asked about a bus to Sobra, located at the other end of the island, but got the answer that there is only one bus daily, that leaves very early in the morning. There are many bikes to rent and good biking routes, but walking in the heat in that hilly landscape seemed enough. We started our way from Pomena again to the small lake and went along the big lake, passing the little village Babine Kuće (mainly just a restaurant and a few houses, belongs to Goveđari). Next, after passing through a large vineyard, we reached Pristanište (also belongs to Goveđari) that is 2, 5 kilometres away from Pomena and located directly at the big lake. After getting some ice cream, we considered continuing along the lake. But there was also a sign for Polače, which we had seen just shortly when we arrived with the ferry.

There seemed to be a bus shuttle from Pristanište to Polače, but it was our day for walking, and so we followed the sign that says that it is 3 kilometres away. After some time we left the road for a trail and ascended through elevated greens amid the loud sounds of millions of insects that we could not see, just hear. It was probably over 30°C hot in Croatia every day during our entire vacation. On top of the mountain, we could see the bay.

We came down in Polače right at the ruins, where also a National Park office is located, which seems to have a shuttle service to the National Park and the lakes. Polače is a little bit bigger than Pomena but still a small village. It is still a bit of a hike to the lakes. When we were planning our trip, we were also eyeing a pension in Polače, but now we’re happy to be in Pomena where you have the lakes on a lot shorter walking distance. Polače does have a lovely gravelly beach in the western part. We immediately went for a swim after our hike from Pomena. 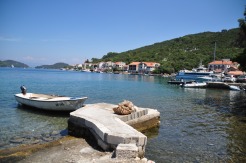 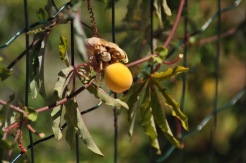 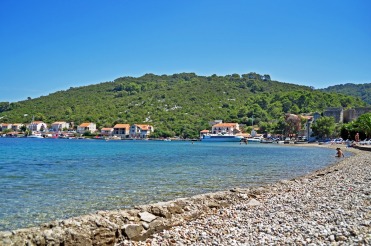 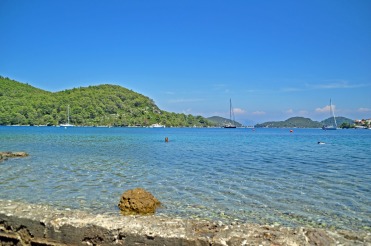 After some time we went back the same way we came from. But at “Mali Most”, the bridge over the canal between the two lakes, we took a walk around the other side of the small lake and stopped for another refreshing swim in the turquoise water, before returning to Pomena. Back in Pomena I took another plunge at the swimming area close to the hotel and just enjoyed another great Pomena-sunset, before going to the Italian restaurant again, the same restaurant we went to the previous night. Our stay on Mljet turned out to be the most pleasant and very relaxed one. While there aren’t many attractions, the island itself is the attraction with a slightly different vibe than other Croatian destinations and without a rush to do anything. Many people just come for a day trip from Dubrovnik, but for us, it was gratifying to stay two nights and do not have much to do than walk through nature, swim, sunbathe and eat. 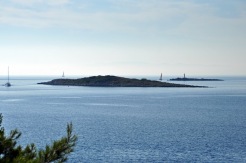 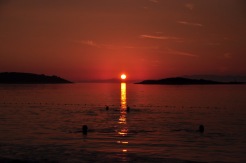 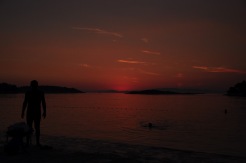