We started early in Akureyri to our next destination Hveragerði with a regular bus by SBA-Norduleid that goes through the Highlands with short stops at some places of interest. The sterna bus also ply this route. The bus left at 8:00 a.m., and it was the first time during our stay in Iceland that a bus was nearly filled to the last seat. So it was cramped, and I wasn’t too happy since we’re going to be in it for a really long time. There was a large group of middle-aged Czech people, and I recognised the language since they were speaking quite loudly. At the first toilet stop at the gasoline station, we had to change to a bigger bus. They probably didn’t expect a huge passenger turn-out. It was great and made everyone quite happy. About half an hour later along the road, we had to stop again. The driver running and looking around the bus, opening the carburettor area, but providing us with no information whatsoever. We later found out that the previous driver of the said bus has forgotten to refuel it. So we had to wait for the other bus, the ones we rode from Akureyri to continue our journey. I’ve asked myself why the incoming driver hasn’t just brought enough fuel (perhaps in a canister) to fill the tank of the bus we’re in, instead of us unloading and reloading our luggage and ride the cramped bus again.

At least it wasn’t too far from there to the next stop, Hveravellir. There was supposed to be a 1-hour stop, but because of the delay, they cut the time to about 20 minutes. The wind was gushing, and it began to rain, but we were still able to take a quick roundabout on the wooden path above the hot springs and adore the view of the geothermal area while the rest just went inside the restaurant for a quick meal. There was the Swedish guy from the previous tour with us, and he made a quick plunge at the pool. It is beautiful but not as spectacular as Hverir in Northern Iceland. 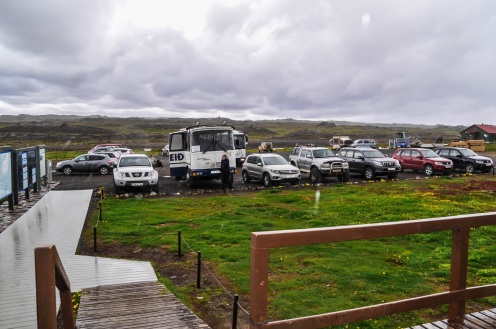 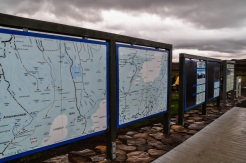 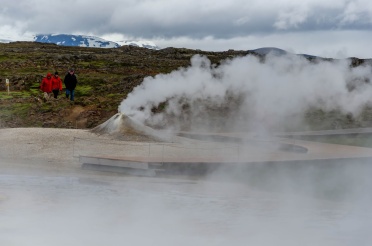 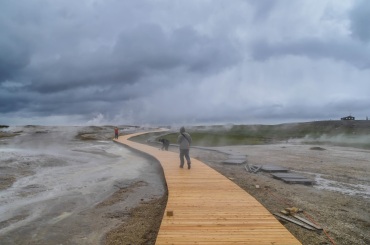 After another hour of driving through the almost flat but vast mountainous landscape, we come to Kerlingarfjöll where we had another 15 minutes stop. One passenger, a guy from Switzerland, went off, but two French travellers came aboard in an already cramped bus. The area looked spectacular, and if ever I come to Iceland again, it needs to be explored extensively. A couple of nights would be minimum for a stay. It’s in the middle of nowhere. Aside from the guesthouse there, a restaurant, a camping area, that was pretty much it. It’s just this fantastic landscape, and there seem to be some beautiful hiking trails. 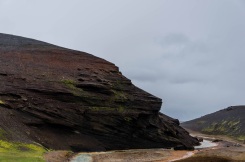 After another couple of hours in the bus, we’ve reached the huge waterfalls, the Gullfoss, where we had about 30 minutes. That’s of course not enough time to enjoy such a wonder of nature, but at least we could walk all the way to the platform right next to the waterfall. I’ve readied my camera and tripod for a couple of long-exposure even before going down the bus to minimise the time of setting it up. It was raining when we came out of the bus, and I could barely hold still the tripod. It was spectacular, so it was decided that we would go there again, from Reykjavík later in the journey. So I took a few more shots and just hoped that a few would turn out alright. 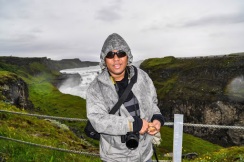 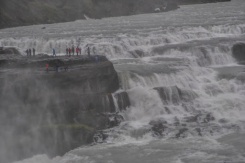 Just a few kilometres away from the Gullfoss we stopped next at the Geysir. There’s not only the Geysir but an interesting geothermal area with the Strokkur being the geyser that’s frequently erupting. The other passengers decided to stay on the bus. It seemed they have been there before. The English word geyser (a spouting hot spring) was derived from “Geysir” which in turn was also derived from the Icelandic verb “geysa“, to gush. While it was raining again, (it always started to rain whenever we go out of the bus on that day) we went around the area and to the Geysir. We waited a while for the eruption of the hot boiling water. They said that the eruptions at Geysir can hurl boiling water up to 70 meters in the air. 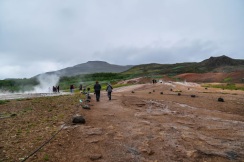 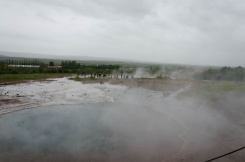 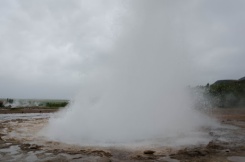 Finally, we arrived at about 6:00 p.m. at our final destination for the day, Hveragerði, where we would stay for two nights. The bus let us out at the N1 Gas Station at the entrance to the town, which is the stop for all busses except straeto – their busses stop at the Shell Gas Station. Hveragerði isn’t far away from Reykjavik and calls itself the “Hot Springs Capital of the World”, and rightly so. That was the main reason why we chose to stay there. But first, we had to walk quite a bit to our guesthouse, the Frumskogar Guesthouse. It was raining hard, and we both were already soaking wet, exhausted from the long bus tour. We weren’t sure at first if we were heading in the right direction.It was a huge relief when we found the place. Our strength soon resurfaced when the guesthouse turned out to be fabulous. It was basically a spacious apartment with a small kitchen, bathroom and a flatscreen-TV. But the best was a shared small heated jacuzzi and a steam sauna outside. The reception also provided information about the area with tips where to go and what’s best to do. The “Hot Springs Capital of the World” title seemed very fitting. 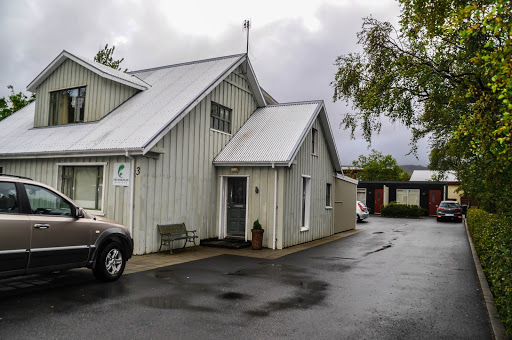 We needed to get our supplies for the next days, so we went out again in the pouring rain to the supermarket. Fortunately, it was still open after 6:00 p.m. We went back immediately and prepared our dinner then rested a little bit. The sun decided to take a peek from the heavy raincloud and decided to cheer us up a bit. With renewed strength, we decided to take the opportunity to make a little stroll around this small town, which is actually like a small village with around 2,000 inhabitants. The Geothermal Park was already closed, so we thought about going there the next day. It seemed like no one is around. Well probably because of the weather but it seemed like we were the only souls running about town. We have read about a small waterfall, the Reykjafoss at the edge of the town. It sounds like a very vast place, but in reality, it was just a short walk away from the guesthouse. We continued there through a small park. 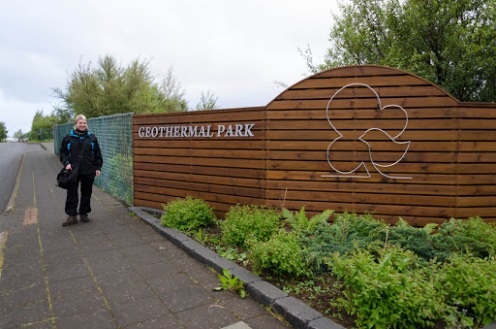 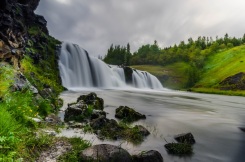 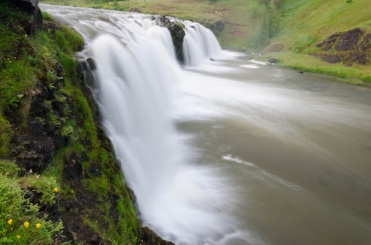 With the help of our free Hveragerði tourist map from the guesthouse, we continued from the waterfall over a bridge across the cold, wild river, a few steps upstream and to the 3 km long “Hotspring Path” that was marked in the map and eventually led back to the town. We went up a kind of a wooded hill and came out at the Agricultural University of Iceland. We thought we were wrong because there was a gate on the street but then walked alongside the gate to the grounds of the university which turned out to be the right path. There were many hot springs and everywhere there was steam coming out of the earth.We followed the “Hotspring Path”, which continued after exiting the university area at the other side and strolled along until it led back to the town over another bridge. It was a small path just outside the small, relaxed and a quite green town, and they have many more small trails just around the town, like the “In the wake of the earthquake-trail“, the “walkway of poets” and the longer “health(ier!) focused trail“. 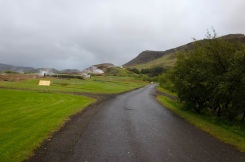 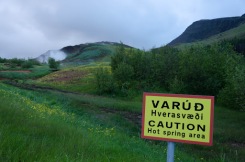 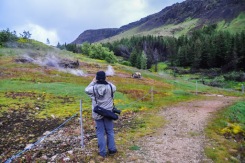 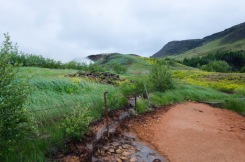 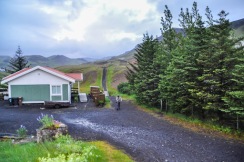 After the very long day (fortunately, the sun goes down in Icelandic summer very late, if at all) we relaxed in the hot pool and the steam sauna of the guesthouse and were already planning the next day. 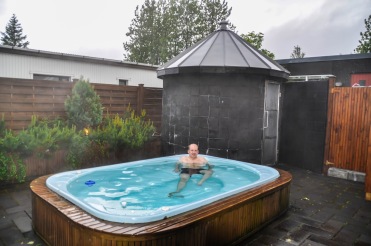 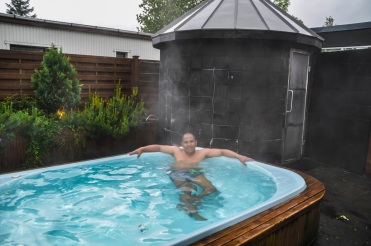