In the morning we had a fabulous breakfast at the hotel in Yufuin, which was included in our booking. Actually, it’s only I, had a big breakfast because my friend didn’t like the Japanese food. For me, it was great: fish, rice, a bowl of soup and much more!

After breakfast, we walked to the Yufuin Train Station to take a train for Beppu. There are many trains from Yufuin to Beppu, and there’s also a bus connection. Most trains require a change of trains in Oita though, so we opted for the direct train at around 10 a.m., which took one hour. As usual, we used our Northern Kyushu Area Pass for the train ride. We wanted to make a day trip to Beppu because of the hot springs there. Beppu is kind of a (literally) steaming town with lots of attractions. The major attraction is the eight “Hells” (Jigoku). We considered about staying there instead of Yufuin but in the end, chose Yufuin because it seemed to be smaller, greener and more relaxing. Still, we were quite excited about Beppu. 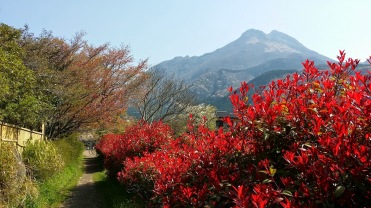 When we arrived at the Beppu Train Station, we first went to the English speaking and accommodating tourist information inside the station. There we bought a day pass for the local bus, a ticket for the entrance to all Hells in the town and got maps and timetables. Then we went to the bus station just outside the train station and took bus number 5, which drives to Kannawa Bus Station, where most of the Jigoku are located.

We decided to go there later and stayed inside the bus number 5 a few more stations and exited the bus after it went onto a mountain and we saw the expansive bridge, we had seen online before. Just after passing a clinic to the left and shortly before this bridge is the entrance to Hoyoland, an indoor and open-air onsen with a steam bath. What makes it unique are their hot mud baths. It’s not a shiny, modern onsen, rather a more rustic, traditional onsen, which made it even more interesting for us. After we paid the entrance fee and stuffed our valuables in the lockers, we walked to the entrance to the baths. We seemed to be the only non-Japanese guests. We already knew the routine from our first onsen visit the day before, so we cleaned ourselves before we entered the first inside onsen, which was – as expected – quite hot! We soon went further, and a passage leads to another indoor onsen, which was not only hot but hot-muddy. After relaxing for a while, we went outside, to huge muddy pools. It was great because the sun was shining, there weren’t too many people, and it lies in a mountainous location. We stayed there a bit before we tried the steam bath, which was so hot, that we couldn’t stay there for long and went to another hot pool which had some kind of waterfall. We really loved Hoyoland, as it was something completely different. 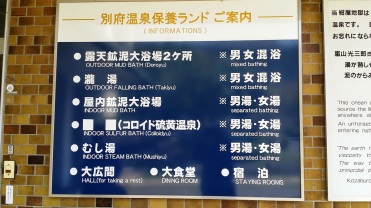 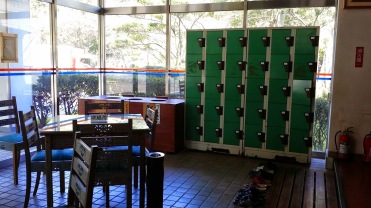 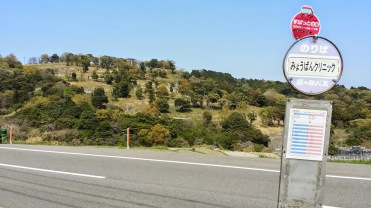 From Hoyoland we took again the bus number 5 to continue further up the mountain. Another two stations away are huts for the production of “yunohana” (sulfuric powder), a restaurant with a viewing platform as well as more onsen, like the Myoban Yunosato and Ebisuya Onsen. We first took a look at the huts, which are in the area of bubbling mud and steam coming from the mountain. There was also a great view of the city with the bridge in front of us. After that, we went to the steaming restaurant for a meal and then back to the bus stop to drive back down with bus number 5 to the Kannawa Bus Station, where the Hells are located. 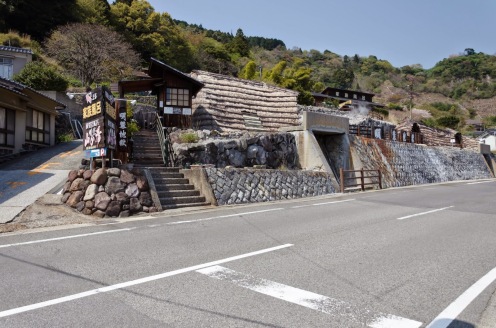 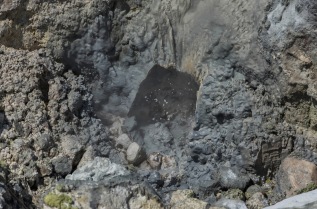 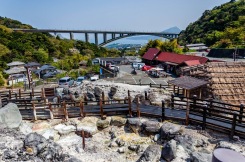 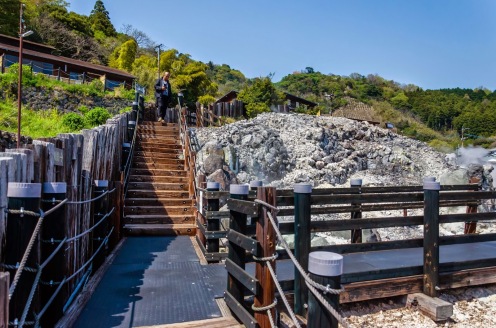 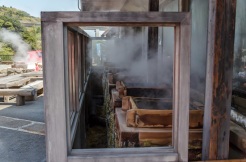 From the Kannawa Bus Station, we first went wrong and came to a little shrine on a hill. But just before the path went upwards there was an orientation map, so we saw that we can go there, exited on the other side of the hill and went left for our first Hell (Jigoku). The six Hells in the Kannawa area are all within walking distance, and you basically go to one after another in about five minutes. We came out in the middle of the Hells and started with the third one coming from the Kannawa Bus Station, the Kamado Jigoku (Cooking Pot Hell) with demon statues and a large souvenir shop, where we made an ice cream stop. 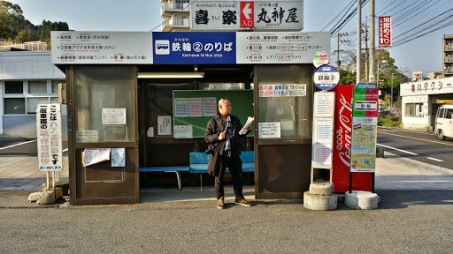 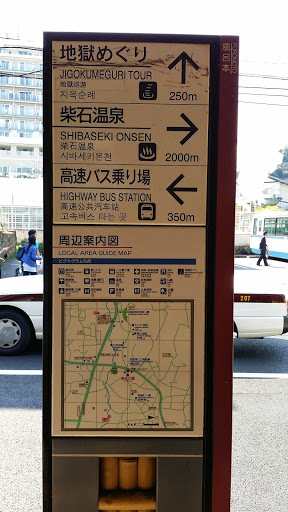 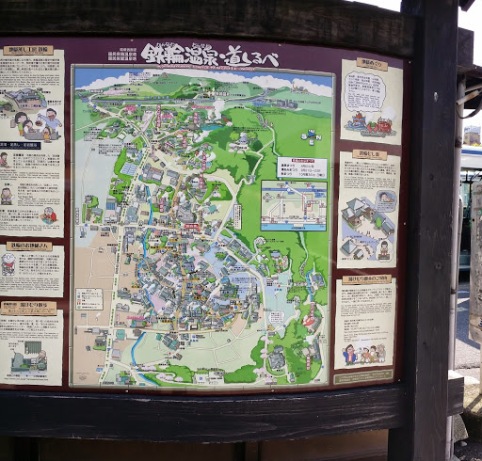 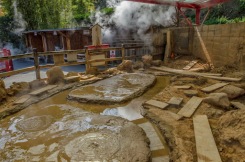 Next was the “Mountain Hell” (Yama Jigoku) which was impressive with all the steam and the mountainous backdrop. While they had a beautiful greenhouse with cactuses, the little zoo wasn’t so great because of the small cages. 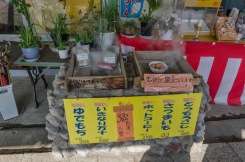 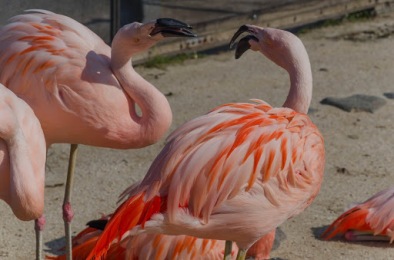 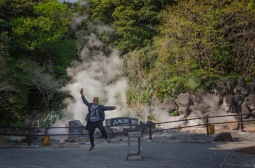 From there we walked to the Umi Jigoku (Sea Hell), which was beautiful with a big lake and a park and steaming blue water and also a greenhouse. 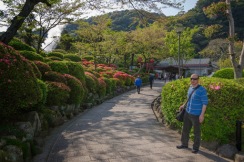 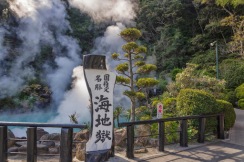 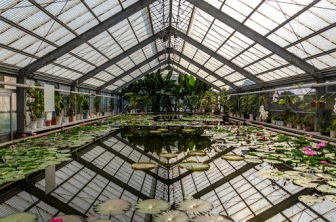 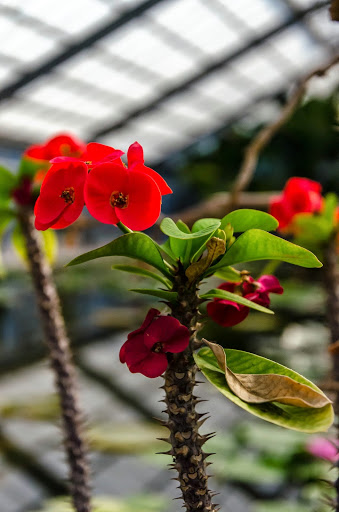 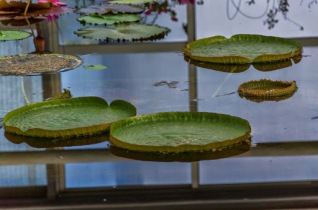 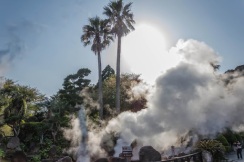 Looking at the watch, we realised that there’s barely time left, considering that the Hells all close at 5 p.m. and when we were at the next Hell, Oniishibozu Jigoku, they were already cleaning up. I opted to just relax my feet in hot water there, while my friend went on to take a look at some more bubbling mud there. Then we decided to at least try to make a short look at the remaining two Hells there near the Kannawa Bus Station. After all, we had passed all Hells. 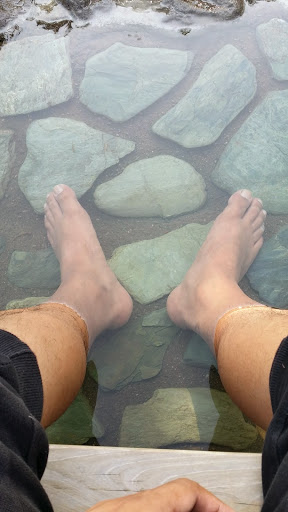 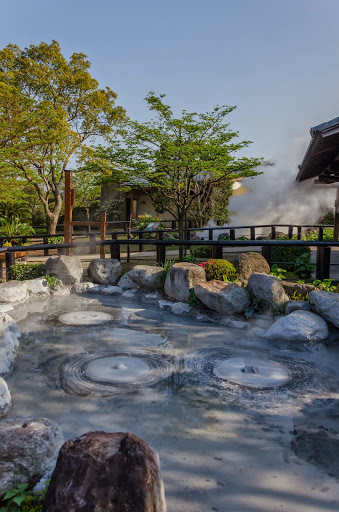 We actually made it just in time to at least get a short look of the Oniyama Jigoku (Monster Mountain Hell) with crocodiles and the Shiraike Jigoku (White Pond Hell), just before they closed. Unfortunately, it was too late to see two other Hells that are a bus ride away (6 minutes with bus number 16 from Kannawa Bus Station to Chinoike Jigoku station). We, unfortunately, didn’t see the red Chinoike Jigoku (Blood Pond Hell) and the Tatsumaki Jigoku (Spout Hell) with a hot geyser. On a different note, we at least saw a geyser already last year on our trip to Iceland. 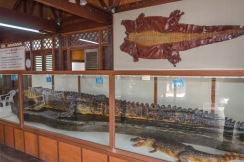 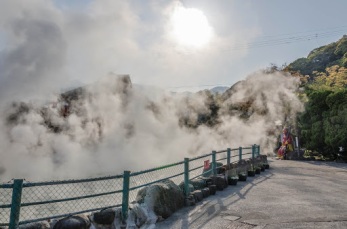 While Beppu has more attractions, including a fragrance museum, a nearby monkey park and aquarium, a variety of onsen and especially a ropeway, we just lacked the time. You can easily spend two days and more in Beppu. We decided to take the bus number 5 back to the train station but realised we wouldn’t get the last direct train back to Yufuin by bus and so opt for a cab. Back in Yufuin we walked into the town to take some food and later relaxed at the hotel’s free private outside onsen, that we had reserved already in the morning and I allowed myself another session on the free, electronic massage chair.