We had planned a day trip from Hveragerði to the Westman Islands and already booked the ferry tickets online in Germany prior to our Iceland trip. We wanted to see Heimaey, where lava from a volcanic eruption buried large parts of the town in 1973. We had chosen Hveragerði as our base due to its excellent bus connection to the harbour. The straeto busses, Route 52 go daily from Reykjavik to Hveragerði and continue to Landeyjahöfn where the ferry departs. Unfortunately, the weather was not good, and there were big waves in the ocean. The ferry company already sent an advisory the night before and cancelled the trip due to unfavourable weather condition. But we were on standby as it might change dramatically. In the morning, the second advisory from the ferry came, and the weather hasn’t turned, so we skipped the bus and decided to sleep a bit longer and just stay in Hveragerði.

So off we went to the “shopping centre”. The supermarket, as well as the tourist office, was located in there. They have a small exhibition, “Quake 2008”, about an earthquake that happened to Hveragerði a few years ago. The exhibition also contains a small earthquake simulator that a visitor can experience a powerful earthquake of over 6.0 magnitude on Richter scale. An ancient fissure can be viewed, lit up through a transparent section of the floor in the library and the tourist information office.

From there, we went to the art museum, that was unfortunately closed, so we continued to the Geothermal Park in the town centre. You can also have a coffee there, but we just walked around the area, looked at the hot springs with names like “Blue Spring” or “Killer Spring” depending on their characteristic. Apparently, the killer spring got its name due to some people who perished there. There’s also a little hot creek running through the park, and at the end of this small roundabout, one can have a mud-foot-bath for extra 750 Icelandic crowns. It wasn’t much but could they just have included it in the entrance fee? 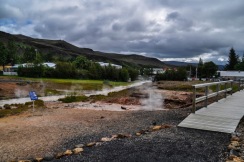 Now it was time for our main hike, to the hot river. The videos and photos on the internet already sold it to me. So we took our map and first walked 3 km from the town along the highway in the valley, passing a golf course and many geothermal powered greenhouses and a farm with many Icelandic horses. The hot river (located inside the volcanic Hengill area in Reykjadalur, which is also called “Steam Valley”) is 3 km away from the car park which is the beginning of the trail. So from Hveragerði to the Hot River and back would be a good 12-kilometre-hike. There was a small café at the start of the trail, the Dala Kaffi, where we made a little stop to drink coffee and eat the very sweet apple cake with caramel topping. It was just too sweet for my already sweet tooth. 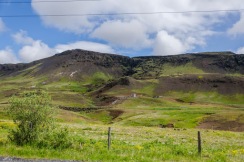 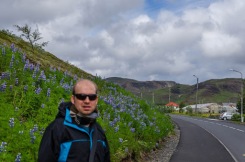 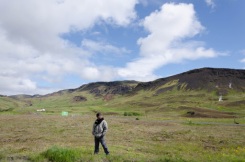 First, we were greeted by pesky little flies that all seemed keen on entering our mouths. After crossing the bridge over a little river, the path slowly went upwards, and a hole in the way showed how fragile the area is. The steam and hot springs all around make one realise to keep on the path. The trail, visibly marked so no one would really go astray, led up to the top of the mountain and we got some fantastic view of the valley, the green landscape and some sheep grazing around on a kind of steep landscape. Fortunately, the  flies were gone. At one point the path led along a canyon, where my fear of heights could finally unfold. To my amazement, there were even a few hardcore mountain-bikers going our opposite direction. But shortly after that, I was rewarded with the sight of another waterfall, and the path went down again into the steaming Rekjadalur valley. 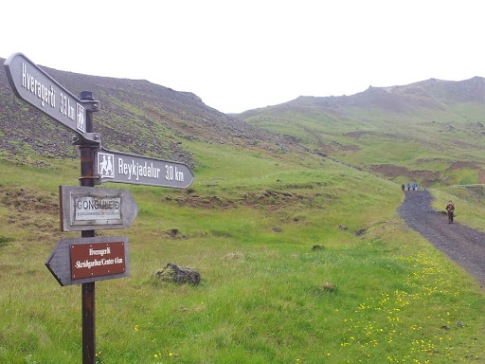 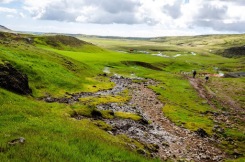 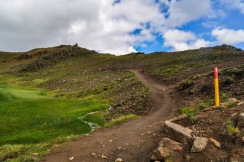 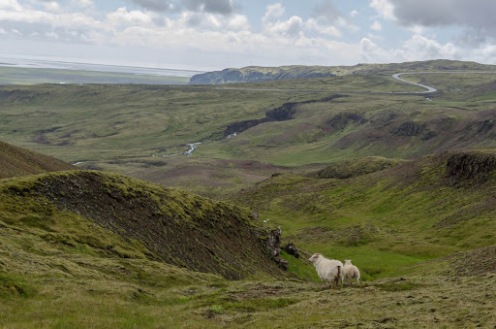 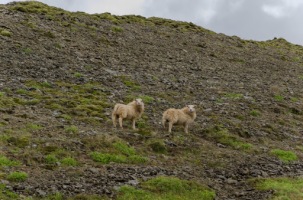 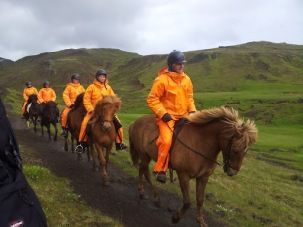 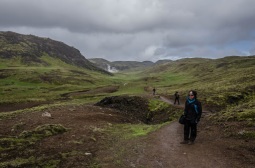 There, we crossed a river and went over a muddy flat until the trail got better and went along a lot of steam spouts. After a while, we finally reached the hot river with many people bathing in it. Unfortunately, the deepest spots (which was just about a meter deep) were all occupied. We found our spot, a few meters before the cold and hot river converged which just over a foot deep. It was definitely warmer than downstream but heck, who needs lukewarm when it was 6°C outside. I’ve never been to a hot river but hot springs in Puerto Princesa and in Coron Island in my native Palawan. 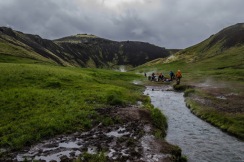 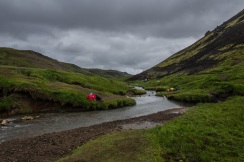 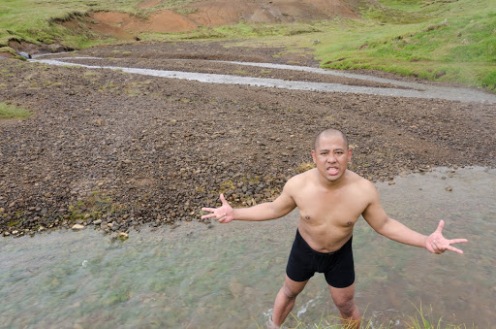 After some relaxing in hot water, we followed the trail back to Hveragerði with many photo-stops of the majestic landscape, the Icelandic horses and the geyser Grýla, which seemed to be inactive though. When we arrived back at our guesthouse, we continued with bathing in the heated whirlpool and the steam sauna. It was a definitely a day spent on “wellness“. 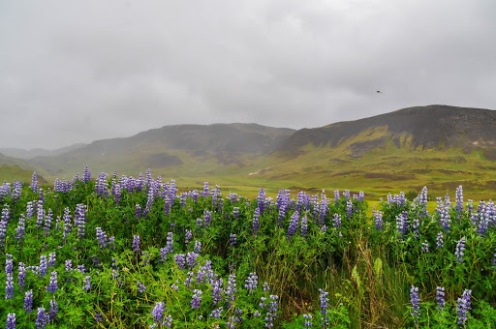 You can easily spend more time in Hveragerði because there were more walks, hiking trails and many attractions nearby. Next, to the more popular ones like Gullfoss and the Geysir, there are also little fishing towns like Eyrarbakki and Stokkseyri which were accessible by straeto bus (Route 75), when you first take a bus to the nearby Selfoss (Routes 51 and 52). In Stokkseyri there’s also a huge museum dedicated to elves, trolls and northern lights called Icelandic Wonders – and even a “Ghost Centre”. Unfortunately, we didn’t have time for that excursion. For us, Hveragerði became the real highlight of the whole Iceland vacation.